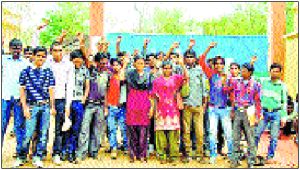 CM Singh is Principal with a difference.Though his academic credential was kept secret by him,he was facing the charge that he had misbehaved and teased a girl student..

So bad was his reputation that students –both boys and girls were up in arms against him for the past over a month.Singh was known as ‘lady killer.’

After he allegedly teased a girl student of the Ranchi University’s Ram Lakhan Singh Yadav college in Ranchi where he was posted as Principal,the students sat in dharna and held procession demanding his dismissal.

The RU authorities instead of initiating legal action,transferred him to Mandar college.But when Singh went to college to assume the charge on Thursday,its students protested and held demonstration demanding legal action against him.”He is the lady killer.We wont accept him as our Principal”,states a pamphelet circulated by students.

Singh was not ready to speak.”At any cost we will not let him join the college’,said Pradeep Mahali,a leader of the students owing allegiance to the Akhil Bharatiya Vidayarthi Parishad.