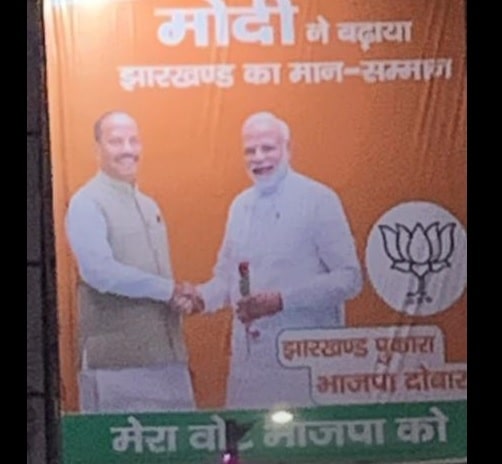 This billboard coming out across the state before the third of the total five-phase Assembly polls 2019 on December 12 is suggestive of elements of continuity and change in advertisement policy of the ruling BJP led by the CM Mr Das.

Consider the prime element of continuity first. Most of the BJP's billboards displayed shaking- hands- picture of the PM Modi-CM Das. In a couple of public meetings in the past, the PM  had applauded the performance of the CM and described him as his 'friend.' Even the BJP President Amit Shah had praised Mr Das and declared that if the BJP is voted back to power, he will be the CM again.

Aware of the strong support of Mr Modi and Mr Shah, Mr. Das has always been in Cloud 9. So much so that he dared to shout, yell and scream in public meetings. Many a time, he was video tapped scolding senior citizens and women. This had generated a wave of anger of the conscientious people against Mr Das. And yet, he preferred to portray himself as the PM's friend.

In any case, the BJP's previous billboards in the first and second phase polls had widely carried slogans such as 'Raghubar Sarkar'(Raghubar govt) and 'Ghar Ghar Raghubar(Raghubar in every home). However, since the wind had moved against the BJP in the first two phases, the 'Raghubar' slogans seem to have disappeared. now when many BJP candidates including the CM Mr. Das were likely to be cornered by rival opposition candidates.

So what is visible now is this slogan -'Modi Ne Badhaya Jharkhand Ka Naam'.It indicates that the BJP led by the CM Mr Das, instead of projecting his government's achievements during his tenure of five years, has shifted gear and started mobilising votes in the name of the PM Mr Modi.

Result? The Assembly poll results will show on December 23.