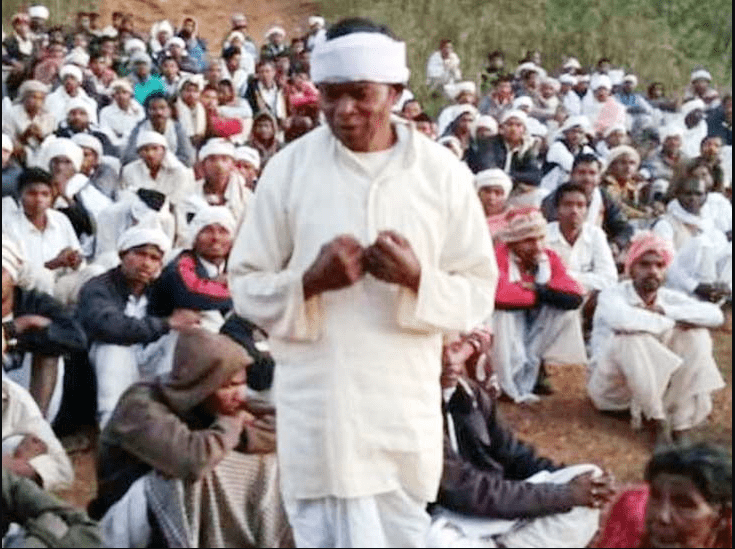 *bhaskar.com picture shows meeting attended by tribals against Pathalgarhi gangsters at Gulikera village in West Singhbhum from where from seven tribals were abducted on Sunday and then killed.

Reacting to the killing of seven Adivasis by Pathalgarhi gang, Chief Minister Hemant Soren has expressed condolences." I am shocked", said the CM on Tuesday.

The Pathalgarhi gang had kidnapped seven Adivasis from their village Gulikera in West Singhbhum district on Sunday. After carrying out search operations for almost 19 hours, the police recovered their bodies from a forest area, nearly three km from Gulikera.

The CM Soren has directed the state police to take 'decisive' action against the killers. However, no arrest was made until Tuesday.

A gang of highly organized smugglers of cannabis resin(opium) and marijuana make Adivasis cultivate these banned products in their land. After cultivation, tribals were paid attractive sums and motivated to consume these drugs. Also they transported and sold these drugs in national and international markets.

As per the Narcotic Drugs and Psychotropic Substances Act, production and sale of cannabis resin and flowers were banned. When the police in league with security forces smashed Maoists and burnt many fields of cannabis resin flowers, they are suspected to have sponsored Pathalgarhi movement.

Traditionally, in order to protect their land and forest, Adivasis held Gram Sabha -a village meeting. If the majority took the decision to prohibit entry of 'outsiders' into their village, they blocked the entry and exit roads by putting up stone plaques in the village declaring it a 'prohibited' area.

A number of plaques were put up by Pathalgadhi activists in several areas of the cannabis paradise -above districts in 2017-18-19. Most of these activists were learnt to be backed by cannabis smugglers. When the print media exposed them, the police launched action.-FIRs were filed and scores of accused brought to justice during these three years when the BJP government led by Chief Minister Raghubar Das was at the helm of affairs.

After the BJP government was routed in 2019 Assembly polls and coalition government led by CM Hemant Soren was formed, a radical swing was recorded by the state government. It was on December 29,2019, when the Soren government took in its first decision in its Cabinet (without evaluating and plus and minus points) and dropped all criminal cases against the accused in Pathalgadhi cases.

The result was visible in the latest case of Pathalgadhi. The FIR revealed that James Bud, Deputy Mukhiya of Gulikera among seven Adivasis were thrashed.' Then Pathalgadhi gangsters took them to the interior forest and killed them', said the police.

On a tip-off, the police launched a search operation and recovered dead bodies of these seven Adivasis.Their fault? They were holding meetings and carrying anti-Pathalgadhi agitations in their villages in Jharkhand.