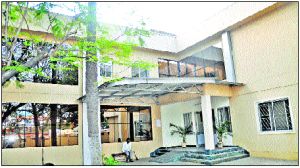 This is the mother of all excuses produced by the Ranchi Municipal Corporation for not making use of the crore of rupees worth building meant for running a hospital in the heart of Jharkhand’s capital.

And then leaving this building under the lock and key with dust,termites and spiders to take care of this state of the art building located near the Ratu Road Market complex.

The excuses,furnished by the RMC range from:none of the bidders fulfilled the criteria to the claim that efforts were on to turn this building into a hospital fulfilling the norms of Bureau of Indian Standards(BIS) and National Accredition Board for Hospital(NABH).

This building spread over 10,000 square feet size at this prime location has its own past.Till 2009,the RMC managed and run a hospital for the lower middle class and poorest of the poor from a dilapidated house with cracked floors and walls and leaking roofs made of earthen tiles.

Many state government functionaries saw it and looked the other way.But one man who is credited to have gifted a water tank,a school,drains and road to Islam Nagar(Now reduced to rubbles after the demolition drive undertaken by the state administration following a Jharkhand High Court’s directive),Chhath Ghat at Bada Talab and also undertook development work at Harmu cremation ground,saw a glorious dream to construct a modern building of a hospital equipped with lab,operation theatre and other gizmos for the poor.This man was  Parimal Nathwani,Rajya Sabha member from Jharkhand.

Records maintained at the RMC show that Nathwani approached RMC authorities and volunteered to reconstruct the whole building from scratch keeping in view the needs of a functional dispensary. It was agreed by the authorities.

In order to expedite the work, he took upon himself reconstruction and decided to donate his own money for the noble purpose as a part of discharging his obligations to the people of Ranchi. Results:

As per the plan,the hospital was to institutionalized in two phases.

Under phase-II: there was a plan to begin treatment for cancer therapy facility and minor surgery related operation theatre and other facilities. For cancer therapy and dialysis patients, a 20 beds’ IPD ward and so on was planned.

To turn the building  and the plan into a functional hospital was the responsibility of the RMC.But it failed to do so during the past more than one year and four months.Why?

Investigations revealed that the RMC had brought out atleast three tenders,each inviting bids from organization/hospital group and others to run a 20-bed hospital fulfilling the norms of BIS and NABH.Though many bidders including Sidhi Vinayak Agency,Nefron Kidney Care Clinic and Viraz Hospital and Research Centre participated in the bid,none of them were awarded the contract.

This was due to the ten letter word-corruption.”None of the bidders were ready to give the amount of  commission demanded by the authorities”,giggles a clerk of the RMC adding:”In addition to the commission,they wanted to keep the regulating power of this hospital in their hand so that they can milk the bidder in all time to come.”

Aware of it,Nathwani did not sit idle.He volunteered to run this hospital.In atleast two letters addressed to the then RMC Chief Executive Officer Vinay Kumar Choubey,Nathwani wrote that he can run the hospital/clinic for the “needy people’and the people of the “BPL category at the minimum cost” provided the RMC allowed him to “run and maintain’ it “without any interference and or control or supervision of the Ranchi Municipal Corporation,RRDA,the Government or any of their Department/Agencies.”

This was not acceptable to the RMC authorities.They wanted to retain the power of regulation of this hospital in their hands.”The land is ours.We can not give a free hand to any private party”,said a senior RMC officer.