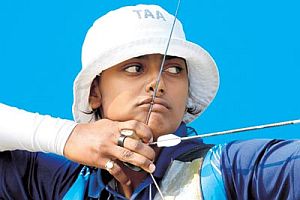 An official effort to make archery princess Deepika Kumari become neighbor of king of cricket Mahendra Singh Dhoni is on.

In fact,after Dhoni became the star of Indian cricket,the state government honoured him by providing him with a plot of land in Harmu Housing Colony in Ranchi.

Soon,Dhoni built a bunglow creating it as a site of interest for the onlookers.

Now,when Deepika is slated to get a government land near Dhoni’s bunglow,Harmu is sure to become a place of pilgrimage for sportspersons and fans.

The only thing is though the state housing department has already taken a decision in this regard,it was yet to notify and transfer the title of the land to Deepika.”We hope it happens sooner than latter”,said Saroj,Singh,a resident of Harmu.