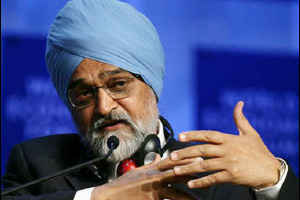 No policy decision on according special status to Bihar was taken,said Montek Singh Ahulwalia,vice chairman of the Planning Commission.

Singh,who presided over the 35th Convocation function of the Indian School of Mines in Dhanbad today,said :”Bihar package was already with the Central government.But no initiative was taken with regard to Jharkhand.”

He expressed the hope that in the economic front there was no reason to be pessimist.The Indian economy will bounce back.’During the 12th plan period,the growth rate could be around five percent,though I think it could be anywhere between 7 to 9 percent’,said Ahulwalia.