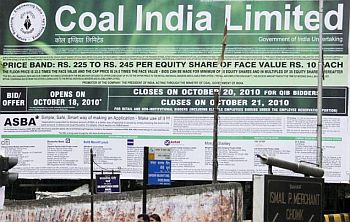 A day after the government indicated that it may sell 10 percent stake in the Coal India Ltd in the new fiscal starting April 1,the state owned PSU was dumped by the sensex.

Another report said:”Shares of most state-owned companies are down due to the government’s plan to sell stakes in some of them.”

On Sunday,a report by the Press Trust of India indicated that the government was planning to sell a 10% stake in the PSU in the next fiscal year starting April 1 to raise about 180 billion rupees.” New Delhi has a target to raise as much as 400 billion rupees by selling stakes in state-run companies next year’,said the report.