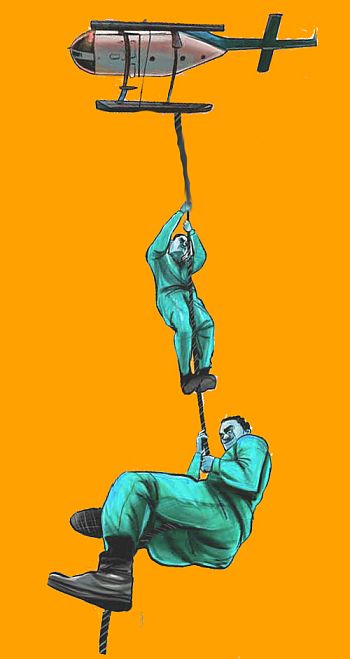 Digging tunnel.Jumping the highwalls.Sprinkling chilly powder.Many such ways were used by prisoners to escape from the jail.The latest is use of helicopter in a daring day light escape from a Quebec jail.

Though both Benjamin Hudon-Barbeau and Danny Provencal were recaptured after the helicopter was tracked to Mont Tremblant, a short distance away from the prison,their bid to escape from prison by helicopter hit the international headlines.

Reports said the scenes were reminiscent of a Hollywood film.Both were flown away in broad day light by a helicopter piloted by their accomplices.

First a private helicopter meant for tourists was hijacked.Then it was made to fly over the St Jerome prison near Montreal and used ropes to pick up the two prisoners.

Later,Hudon-Barbeau, who was in prison in connection with an attempted murder,had called a Montreal radio station to explain his reasons for escaping.”I know that it wasn’t the best thing to do, but I didn’t want to stay in prison anymore,” he told 98.5 FM. “It was not my idea to get away, but Danny convinced me. It was his friends who arranged it outside.”

“The pilot, who is being treated as a key witness, was found inside the abandoned helicopter while the men fled in a white Cadillac”,said reports adding that the police tracked the car to a house in the town of Chersey and all accomplices were arrested.