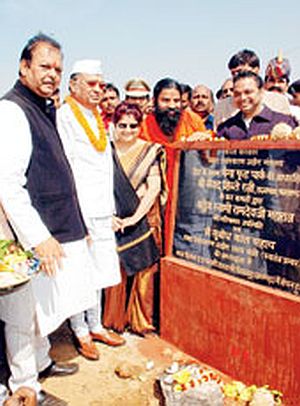 A Mega Food Park is coming up in front of Getalsood dam in Angara block of Ranchi district.The state government had provided the land to a private company for the park.

The construction work has already started.

The company-Jharkhand Food Park Private Ltd-owes to Baba Ramdev and Union Minister Subodh Kant Sahay.“The lesse may transfer absolutely or by way of mortgage or sublease the whole or any part of his interest in the property,and any transferee of such interest or part may again transfer it”,states the industry department’s resolution adopted by the state Cabinet presided by chief minister Arjun Munda and notified by it on December 12.

On February 23,2009-when Jharkhand was under the President’s rule with Governor Syed Sibte Razi -foundation stone of the project was laid by Baba Ram Dev in presence of a dozen VVIPs including Sahay.

The project with an outlay of Rs 113 envisages to set up 32 fruit and vegetable processing units.After purchasing fruits and vegetables from farmers,owners of these units were supposed to process,package and sell their products across the country and abroad,

“In this project,5700 people will get direct employment.In addition,10,000 people will get employment indirectly”,states a draft approved by the state cabinet.This was in accordance with the Union Ministry of Industry and Food Processing’s plan to increase the percentage of processed Indian food in the international market from 1.5 percent to 3 percent by 2015.