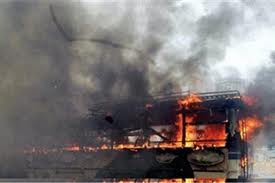 Perpetrating arson and violence for ransom was an old tactic of the Maoists.This time they set afire a bus in between Panki and Ranchi road in Palamau today due to the suspected refusal by its owner to cough up the levy demanded by them.

Palamau DY.SP Rajendra Rai said a group of nearly 30 armed cadres of the Maoists intercepted a private bus and forced its passengers to alight at the point of the gun.”After the bus was empty,it was set ablaze”,said Rai.

The police suspect the crime was committed due to the refusal by the bus owner to pay the amount of ransom demanded by the Maoists.

Reports said,the passengers had to leave the bus and take other vehicles to reach their respective destinations.

After setting the bus afire,the Maoists escaped.The badly torched bus was lying abandoned at the site.