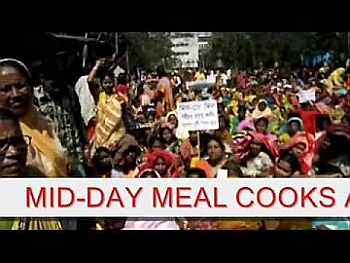 In doing so,she remained busy for the whole day.In the market,where the daily wage of a worker is Rs 200,she could get Rs 3000 per month.But as a cook she was paid Rs 1000 per month by the state government.

Savitri is among nearly 80,000 female cooks who cooked mid day meal for about 45 lakh students in 42,000 schools in Jharkhand,who were up in arms demanding hike in their wages for long.

Now,responding to their demand,the state education department has increased their wages from Rs 1000 to Rs 2000 per month.This was widely welcomed by them.”We thank the government for giving us hundred percent hike”,said Savitri echoing the sentiments of many others.

The state primary education Director Mamta said,these cooks will get the benefit in the new financial year beginning April 1