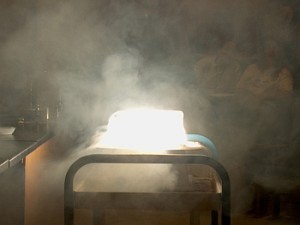 Mystery shrouds the recovery of a box from the bogey of a train carrying body of a 22-year old girl at the yard of the Hatia railway station near Ranchi yesterday.Today,the body was sent for post mortem.

The FIR filed at the general railway police station states that the box packed with her body was lying in the general compartment of the Patliputra Express.

”Soon,the doctors and medical staff were called.After checking the body, they declared it dead and kept the body in the morgue”,states the FIR accusing the anonymous accused of the charge of murder.

Incidentally,The Patna Express comes to Hatia via many stations including Ranchi.The railway police is at a loss to explain the motive and identity of the accused.”It seems that between 20 noon and 4 pm,the girl was packed in the box and dumped in the general yard of the train”,said GRP Hatia’s Officer in Charge Munna Gupta.

Reports said the railway staff responsible to clean the bogey spotted the box.”The box was half open.A part of the girl’s leg was out of the box”,said a staff who informed the railway junior Engineer Djarmendra Kumar.The girl was wearing sky blue salwar and pink kurta.

Near the nostril,signs of a liquid were visible.Whether she was raped can only be confirmed after the post mortem report was handed over to the GRP.