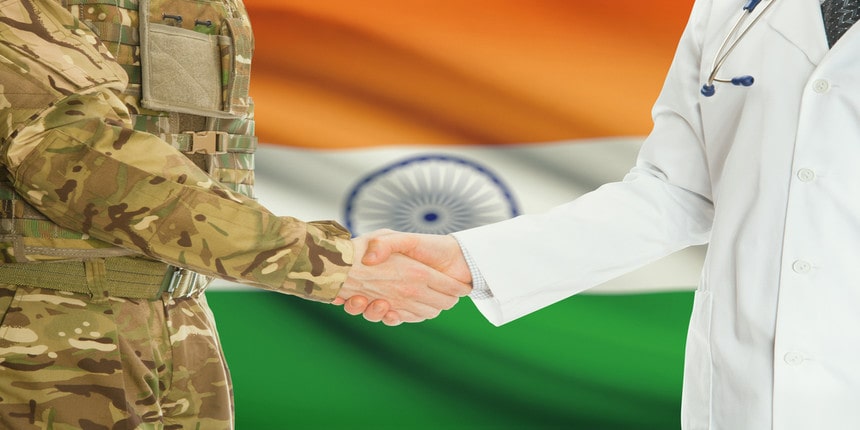 A true-life war zone incident of a lady #Doctor of the Indian Army, her story of grit and #Hippocrates Oath that Doctors serve under, even if a General has to be disciplined in the process.

It was a biting cold, late winter evening in Jan 2004, at Baramula - a border town with the notorious for being the hub of terrorism in North Kashmir.

I was the General Officer Commanding (GOC) of the Division headquartered there. It was past the witching hour and I must have dozed off in the first interlude of sleep in an active, 18 hour day when I got a call on the phone.

The operator displayed his urgency by prefacing the call as #Urgent
"Sir, There’s an IED (improvised explosive devise) blast. Capt Devika Gupta wants to speak to you. MI (Medical Inspection) Room is on line..."

Soldiers in #Kashmir sleep with their weapons and I was no different. In two minutes, I was in uniform. The QRT (Quick Reaction Team) was ready too and we were racing out of the GOC's Bungalow nestling on the banks of the River #Jhelum. The MI Room was close by and when I arrived, there was subdued activity.

The Rashtriya Rifles soldier was part of a Unit crossing Baramula for a night domination patrol when he had stepped on an IED disguised as a transistor.

His intestines had spilled out and his team had rushed him to the MI Room, where the Medical Officer, Capt Devika Gupta her hands encased in bloodied white gloves right up to her shoulders started stitching him skillfully to stop his intense bleeding. It was touch and go!

My staff had reacted fast and placed a Armoured Car - a South African made mine proof bulletproof Casiper and a duty Gurkha QRT to escort the lady doctor and patient to the Base Hospital at Srinagar 60 kms away if that was needed.

All Standard Operating Procedure during my time as GOC.

Capt Dipika told me on arrival, "Sir, It is touch and go. Have put almost 150 stitches on him. He has to reach the ICU at Srinagar for immediate operating as his vitals are collapsing. I need to monitor him and hold a drip otherwise he will die on my hands.
Need an open jeep, not this " cramped tank". She called the narrow ceilinged Casiper that was meant for war, not casualty evacuation.

It was past 1 AM now and the Baramula-Pattan road was notorious for terrorist fire on our convoys because the road was cut through low hills and gullies near Pattan, a very trouble-prone area.

I was the GOC and was morally responsible for any orders I gave. In this case, I felt that she had to go in a Casiper if she was not to lose the patients and her life in an ambulance Gypsy and told her the same in no uncertain terms.

Generals are trained to anticipate trouble and the moment I said what I had to and my men started jumping to respond, a quiet firm authoritative voice intervened.

"Just a minute General sir" That was Capt Devika in a voice that wasn't hers, so my mind registered.

She was dressed in a blood-spattered Green military Sari and had just got up from her stitching of the soldier's abdomen.

She was actually just five feet tall, petite, well-mannered, very good in her job but for some reason, when she pulled herself up and snapped her beret on over her short hair that dark night, with about 50 odd soldiers and officers watching, she seemed to me to be taller than I..

She walked up to me close enough for me to see her angry, flashy, blazing eyes.

No, she said, "I have no doubt. Now tell me, who is the doctor who's treating the soldier?"

GOC's aren't stupid. Anyone would understand and I certainly did.

"Sir, the boy is my patient. Do not interfere. If you do, you will carry the responsibility for his death. I will carry him in the open Gypsy, NOT the Casiper. If I die, my husband will grieve for me. You need not bother (he was a Medical Specialist at the Base Hospital, a great lad whom I had met at the BH while looking up my wounded soldiers)...And sir, you can later court-martial me if you wish but let me go now".

With all my men waiting for my reaction at being "dressed down" by this girl with three years of service to my 36 years.

I did the only thing any Officer and Gentleman would have in a war zone.
I saluted her.

"Capt Devika, I am sorry I interfered. Go. God is with you".

There were at least two people hiding their tears that dark night and she was just one of them.

The drama had yet not unfolded.

At Pattan, the area I was most worried about, one of her Gurkha escort vehicles broke down at about 2.30 AM.

The brave gutsy doctor asked her escort to catch up after repairing the broken down vehicle and proceeded the last 30 kilometers unescorted in her open Gypsy.

Unescorted by other than her courage and God who was with her!

On the terror grid, no one is given special privileges, man or woman as everyone is committed to specific jobs so it was with enormous relief when Devika called me up at 4.30 AM.

"Sir, the soldier has been operated upon and will make it. I joined in the operation. It is Sunday. Can I have half a day off? You are aware I am 6 months pregnant and my hubby has arranged for my term tests".

That morning I called up the Corps Commander.

The Army Commander was in station and was spoken to. So was the Chief of Army Staff!

Three days later, she was awarded the Chief of Army Staff's Commendation Card for her heroism and devotion to duty.. a rare honour!

Months later this Tigress had delivered a baby.

A child who would one day hear about a great, fiesty Mum.

A woman who sorted out a protective General.. and won!

When some of my peers say or write that women are not suited for the Uniform, I react very strongly in their favour because the women I have seen and interacted with were Tigresses to the core.

They are as lean, mean & keen as any man. Walk the same walk!

Hats off to her- courageous Tigress of the Indian Army.