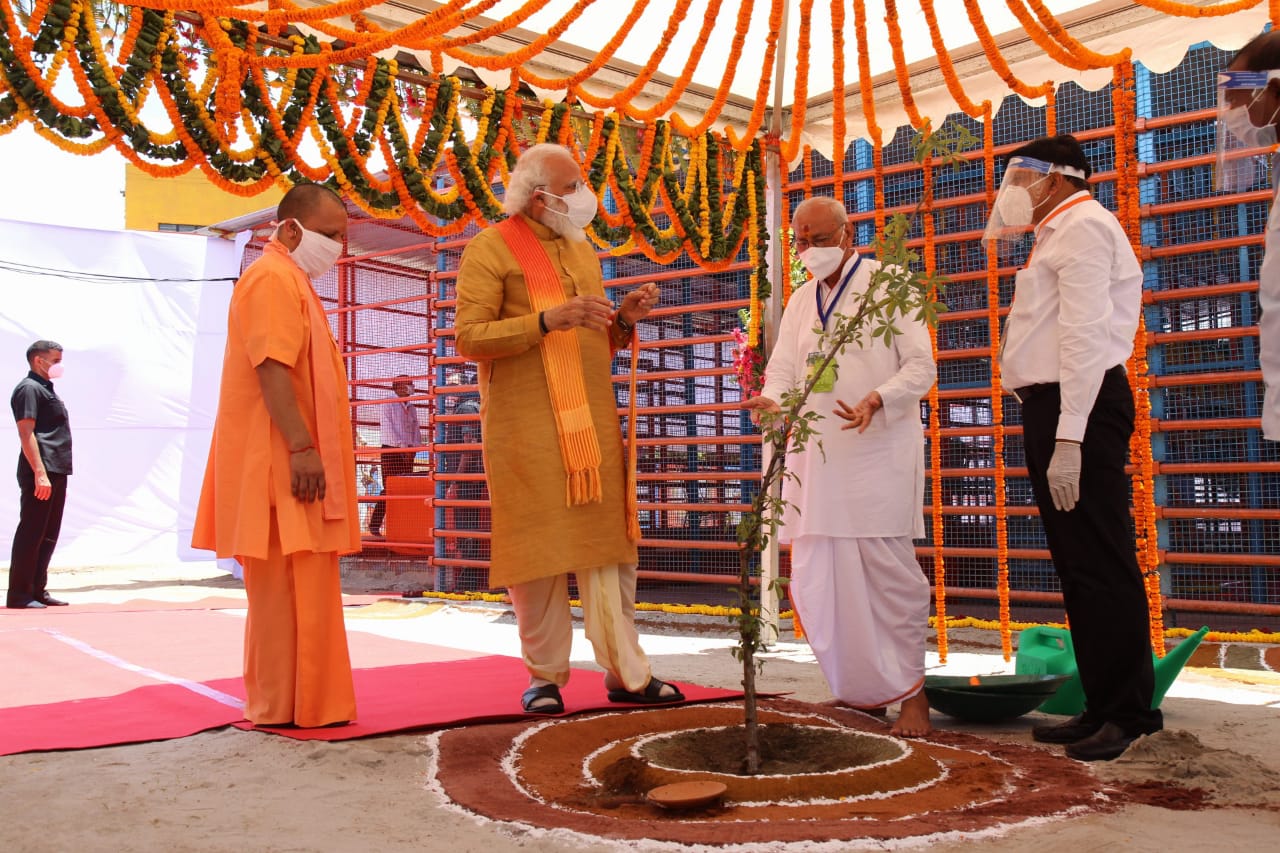 *PM Narendra Modi(second from Left) planted a tree of Parijat outside the site where Foundation stone of the Ram Janam Bhoomi Temple was laid by him in Ayodhya in presence of the RSS Chief Dr Mohan Bhagwat(Third from left) UP CM Yogi Adityanath ( First from Left) and Manoj Khare( Indian Forest Service Officer).

Every day is not August 5,2020-when foundation stone of the Ram temple was laid after almost five hundred years of struggle and movement, resulting in the death of thousands of people in Ayodhya.

It is a historic day. So mainly because the religious event passed off peacefully. There was no violence, no fight. Instead, the high quality of the democratic process was followed and practised.And, after the apex court of India delivered its unanimous verdict, Prime Minister Narendra Modi laid the foundation stone of the Ram Mandir.

Most noteworthy is none of the minority communities members have raised fingers against it.In fact, many Muslim leaders had welcomed the event.It shows a mind-boggling victory of democracy in India.

Politically, even Opposition leaders such as ex-MP CM Kamal Nath and Priyanka Gandhi whose Congress party had consistently opposed the Ram Janam Bhumi case in the top court have spoken in favour of the Ram Temple in Ayodhaya.

Today, many people in the USA, Spain, Britain, France, and Germany have welcomed the Ayodhya event and enthusiastically paid homage to Lord Ram. Of course, they must be his followers-‘Ram Bhakts’.

In any case, historical records show, many of these Ram Bhakts had either laid a movement, struggled or had sacrificed their lives to protect the Ram Janam Bhoomi or build the Ram Temple. In Ayodhya.

Which is why perhaps there Is a palpable sense of joy among Hindus,Sikhs,Jains and Buddhists. Hope, it buries the old animosity and conflict between communal sections of Hindus and Muslims for all time to come.More so because Lord Ram is not only worshipped as an incarnation of Hindu God but also as an ideal Supreme Being.

Now, with the foundation laying function over, a new chapter of the Ram Temple has opened.So many saints and Hindu leaders including Narendra Modi are being applauded worldwide.In my view, I feel, there are  five persons who deserve to be saluted by every conscientious citizen.