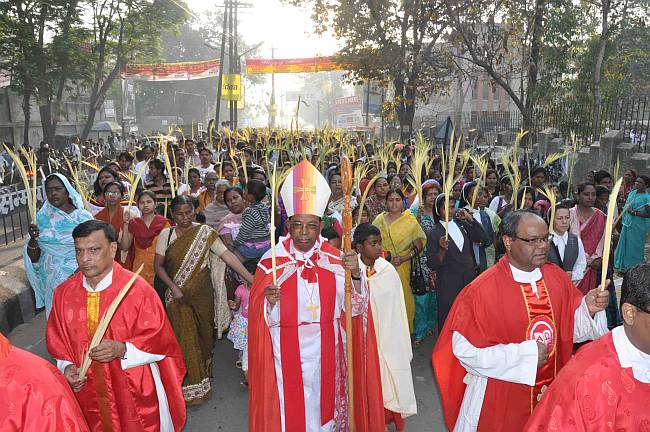 25 Palm Sunday-1 : Cardinal Telespher Placidus Toppo and other priests during a mas on â€˜Palm Sundayâ€™ at the Catholic Church in Ranchi on Sunday. Pix by Ratan Lal

Records mentioned in the Wikipedia says “Palm Sunday is a Christian moveable feast that falls on the Sunday before Easter.The feast commemorates Jesus’ triumphal entry into Jerusalem, an event mentioned in all four canonical Gospels.

In many Christian churches, Palm Sunday is marked by the distribution of palm leaves (often tied into crosses) to the assembled worshippers. The difficulty of procuring palms for that day’s ceremonies in unfavorable climates for palms led to the substitution of boughs of box, yew, willow, olive, or other native trees.

The Sunday was often designated by the names of these trees,as Yew Sunday, or by the general term Branch Sunday.”

The festivity in Ranchi was led by priests and Cardinal Telephore Toppo.