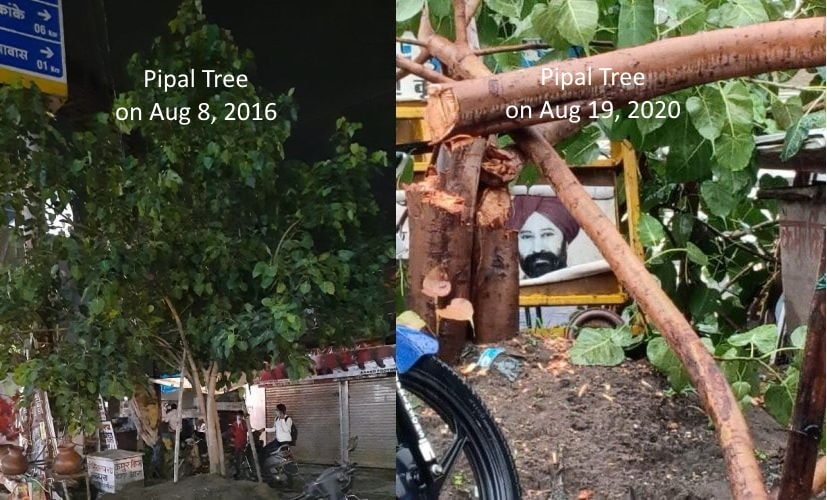 Scores of youths today hit the street in protest against the cutting of a Pipal tree near Ratu road Chowk in Ranchi.

Almost four years old, green and grown-up, plant of Pipal was found in pieces this morning. The members of Rashtriya Yuva Shakti(RYS) led by Uttam Yadav gathered at Ratu Road Chowk and demanded the arrest of the yet to be identified culprits who had cut this pipal tree, a rare of the rarest incident in Bihar and Jharkhand where every leaf of Pipal is held sacred by many people.

As the day advanced, these youths submitted a letter of complaint with the Sukhdeo Nagar Police station as well as the forest department demanding the arrest of the tree cutter.

“ We will launch dharna if the culprits are not arrested said”, Yadav. In fact, the root of every pipal tree which emits oxygen 24x7 is considered sacred by many Hindus who have been worshipping Pipal tree since the days of the Indus Valley (2500 B.C)and the Rig Veda (1500 BC).

More, it is believed that ‘love’ is the seed of Pipal(Ficus Religiosa). It grows even at the site where there is no opportunity.No wonder why the God Buddha had gained enlightenment under the Pipal tree in Nalanda, Bihar.

Aware of it, RYS activists led by Uttam kept protesting against cutting of this Pipal tree which was planted by one of them in 2016. “Since the remains of the cut pipal tree can not be enlivened, we want the forest department should plant a grown-up Pipal tree at the same site where it was growing”, said Yadav.