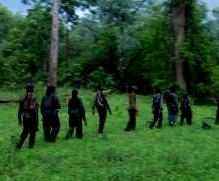 An intra party feud resulting in the death of ten Maoists belonging to the CPI (Maoist) including four leaders of the Maoists Madhya zone — the area south of Grand Trunk Road including Aurangabad in Bihar and Chatra and Palamu in Jharkhand —on Friday,is likely to intensify in Jharkhand.

According to senior police officials, the clash between Maoists and the TPC began in Lakramanda forest 20 kms from Kunda police station in Chatra on Wednesday evening and went on till 4 a.m. on Thursday.

Since these killings were the result of a war of supremacy between the two Maoists outfits,more blood shed is expected.The CPI(Maoist) is bound to retaliate and take revenge in the TPC’s area of influence.