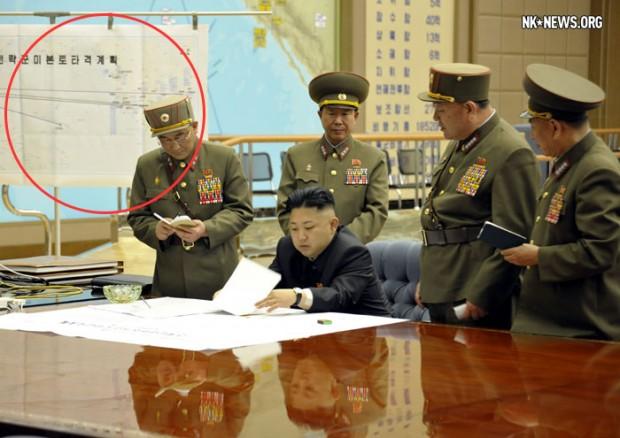 The story authored by Michelle FlorCruz claims on the basis of photographs taken of a recent meeting involving Kim Jong-un and military officials that North Korea may be preparing its nuclear forces to strike a number of U.S. targets, including Washington, D.C.; Los Angeles; Austin, Texas; and Hawaii.

“He has finally signed the plan [for] technical preparations of strategic rockets, ordering them to be on stand-by to fire so that they may strike any time the U.S. mainland,” says Michelle FlorCruz quoting the state-controlled Korean Central News Agency reported.

“The Korea Worker’s Party’s official newspaper, Rodong, published a photo of an emergency meeting that shows Kim signing papers with three other military officials. A map with bold-faced Korean characters and several lines marking different destinations are present in the background of the photo as well”,said the same story.

North Korea News used a Google map overlay to determine that the map was actually of the western coast of the United States. “The overlay shows areas of southern California; Washington, D.C.; Hawaii; and possibly Austin have been marked on the map as potential targets”,states FlorCruz;s story.

“A photo published by North Korean military newspaper Rodong show’s Kim Jong Un with military generals in front of what appears to be a mapped out plan of a U.S. nuclear strike”,states International Business Tim