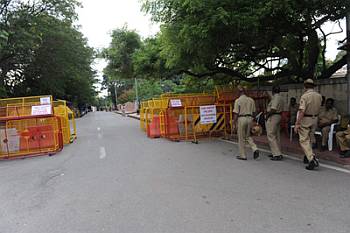 All police stations across the State were alerted following a 48-hour long bandh called by the CPI(Maoist) cadres in Jharkhand and Bihar from April 6 to protest against the killing of their 10 comrades.

BB Pradhan,Additional DGP,said measures were being adopted to ensure normal life remained un affected during the on April 6-7.

Media reports today said the CPI(Maoist) sponsored bandh would be part of its week long protest beginning April 1 against killing of its 10 cadres by the day Tritiya Prastuti Committee (TPC) ultras in the intervening night of March 27 and 28 in Chatra district.

However Chatra Deputy Commissioner Manoj Kumar said that the intelligence had not provided any inputs regarding the protest.”We have not received any intelligence reports in this regard.In view of media reports we will take adequate measures to ensure normal life”,said Kumar.

PTI report said the TPC, a breakaway faction of the CPI(Maoist),had shot dead 10 Maoists and claimed to have taken as many hostage during a gun battle in jungles near Lakramanda village of Chatra district.

The police, however, said they were not aware of anyone being taken hostage.