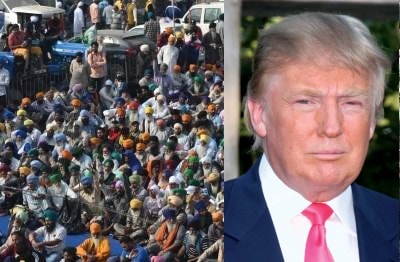 Far away from New Delhi in India where farmers were agitating for repeal of the farm laws that were meant to benefit them in India,in Washington,USA, President Donald Trump has approached the US Supreme Court against the results of last month's presidential election, which he alleges were rigged in favour of his Democratic challenger and President-elect Joe Biden.

While farmers were not ready to listen to amendment proposals put up by the Centre,Trump, a Republican, has been making unsubstantiated claims about widespread voter fraud and electoral malpractice in the presidential polls. The US State election officials have denied any such large-scale fraud.

Nobody knows why these farmers were not ready to understand that these agro- reforms were against middle men who exploited them,Trump is not ready to leave the White House even though  Biden had received 306 electoral votes, more than the required 270 of the 538 Electoral College votes in the November 3 presidential election.

Trump has already moved to intervene in a Supreme Court case brought by the Texas Attorney General Ken Paxton that demands that the 62 total Electoral College votes in Georgia, Michigan, Pennsylvania, and Wisconsin be invalidated.