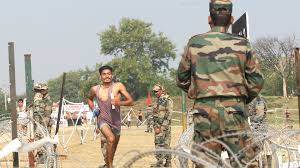 The arrest of four persons in Shahjahanpur in UP has exposed them to the charge that they were involved in facilitating recruitment in the Army on the basis of fake documents.

On suspicion,  when police interrogated them, they confessed to their involvement in the recruitment racket and were arrested on Wednesday.

Those arrested have been identified as Shahjawaz, alias Sonu; Mukesh Singh; Aniruddh Mishra; and Aftab Khan.

As per the information provided by  Shahjahanpur SP of  S Anand, Upendra Kumar and Aman Kumar, both residents of Bulandshahr, had given Rs 7,500 each to Aftab Khan for preparing their fake address proofs and were selected in the Army with help of the gang's kingpin Aadesh Kumar.

Police have recovered fake stamps and other documents from the accused, the SP said, adding that a team has also been sent to Bulandshahr for getting more information about Upendra Kumar and Aman Kumar.