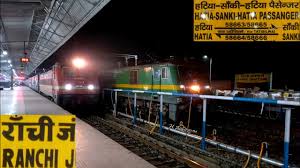 The bus passengers who travel from Kolkata to Purulia or Ranchi to Purulia have gained rail service,thanks to South Eastern Railway for launching train service on this route from Wednesday.

The Kolkata based Howrah-Ranchi special train was introduced on December 23.This train moves  from Howrah-Ranchi via Purulia thrice a week on Wednesday,Thursday and Saturday.

Alongside,South Eastern Railway has shut the movement of Hatia-Yeshwantpur Special train on December 29,2020.