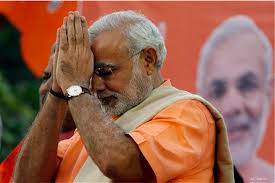 Arjun Munda is out.Narendra Modi is in.

This is the latest story from the land of Shibu Soren-Jharkhand-known world over also as birth place of Mahendra Singh Dhoni,Team India captain.

Dhoni had come up playing cricket in the street corner of Jharkhand’s capital-Ranchi where Soren had laid the foundation stone of the Jharkhand State Cricket Association(JSCA)’s stadium when he was the chief minister of Jharkhand in 2008.

Four years later today,when Soren is old and his son Hemant was calling the shots in his led party Jharkhand Mukti Morcha,the stadium is waiting to be inaugurated by Gujarat chief minister Narendra Modi.

The inauguration is slated to be held on January 18,a day before the India vs England ODI is set to be played inside this magnificient stadium.

Indeed,when the international match will be played for the first time in Ranchi,the players of England and India led by Dhoni will be around and the stadium will be packed with 40,000 plus cricket fans. Isn’t this an ideal platform for Modi to address the nation and the world at large.Forget Munda and Sorens who may be invited to grace the VIPs seats in the stadium?

Just a week back,on January 8,Hemant had toppled the Arjun Munda government with his father backing him.Right now,Jharkhand is poised for the third spell of the President’s rule and the caretaker chief minister Arjun Munda was preparing to vacate the official residence of the chief minister.

A few days ago,when Munda was the chief minister,the JSCA president Amitabh Choudhary had in his press conference held inside this stadium declared that Munda among others will be the chief guest on the occasion of the inauguration of this stadium.But now with Munda out of power,his status was of the caretaker CM,who was of worth little in front of Narendra Modi,a rising star of the BJP and its prime ministerial candidate in 2014 general elections.

Which is why perhaps,Choudhary preferred Modi leaving Munda and Sorens to fend for themselves. Choudhary an IPS officer of 1986 batch,Additional Secretary in the Jharkhand government’s Home Department,an IITian,has unblemished service record.He had performed gallantly in the police service and is credited to have worked hard-socially,politically and legally- to successfully found the JSCA,lead it and build its stadium-a marvel of architecture which is equipped with modern facilities.

Since Choudhary nursed the ambition to contest the forthcoming elections,either from Ranchi or Jamshedpur Lok Sabha constituency,he deemed it to dump Munda and reportedly get in touch with the Wikipedia fame Narhari Amin,

Amin(born 5th June 1955) of the Bharatiya Janta Party, is a former senior leader, ex-MLA and deputy Chief Minister,Gujarat,belonging to the Congress party.He had left the Congress on December 5, 2012 after he was denied a ticket to contest the December 2012 Legislative polls and joined the BJP on December 6,2012 in the presence of Modi.

Neither Amin nor Choudhary were available for comment.But,Choudhary,reportedly used Amin to have Modi accept the invitation to set a record of sorts in the history of sports and politics in India!