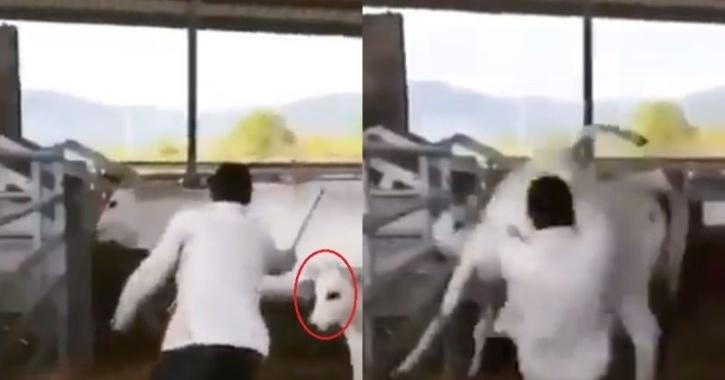 If you beat and thrash a calf, can arrest you and send you to jail.

No joke this.A man was  arrested for allegedly thrashing a calf in east Delhi's Mandawali and leaving the animal writhing in pain on Wednesday.

On complaints circulated on social media and CCTV footage,the Delhi police had to identify the man as Kamal Singh,a resident of Mandali in east Delhi.

Investigation revealed that the police personnel were rushed  to the spot and found the calf in injured condition.The injured bull was  Sanjay Gandhi Hospital for medical examination and a proper treatment was given to it.

The CCTV footage of the incident shows the man passing through a road with some documents in his hand when the calf, standing near to a cow, charges towards him and just about hits him.

Kamal gets unnerved.As his documents fell on the ground, he appeared angry. The video then shows him  kicking the calf  before he collects his documents. He then again thrashes the calf multiple times with a stone, leaving it in pain so much so that it struggles to even stand on its feet, the CCTV footage shows.

"On the basis of DD (daily diary) entry and the CCTV footage, a case was  registered under section 11.1 of the Prevention of Cruelty to Animals Act and the accused arrested," Deputy Commissioner of Police (East) Deepak Yadav said.