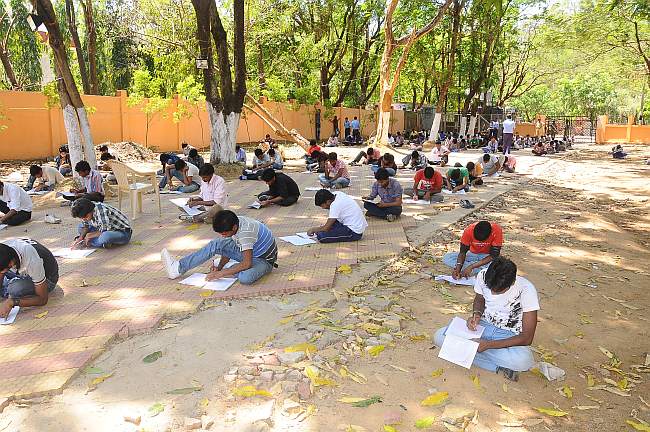 Scorching sun,sultry weather and dirt surface carrying stink of garbage inside the walls of the Astro Turf Hockey stadium in Ranchi.This was the venue of written test conducted by the Indian Navy for recruitment of sailors.

Scores of candidates-all below 21 years of age-took up the test sitting on the dirt floor.”Its so hot and sultry that I could not write what I knew.I was sweating and my mind was numb”,cribbed an applicant echoing the sentiments of many others.

The Indian Navy had organized the written test –sailors for senior secondary recruitment.The test to be continued till Saturday is being held in the batch of 250 -250 students.Many students appeared in the test near the garbage dump inside the Astro Turf hockey stadium.

No body was ready to comment on the plight of these candidates who were seen gasping for breath,wiping sweat and writing the script by squatting on the dirt floor.

One of the organisers said on condition of anonymity that they were so scared of the media that they had not come in uniform.”What we can do”,he asked.”We had tried to hold the test in government schools.But the state government did not give permission.”