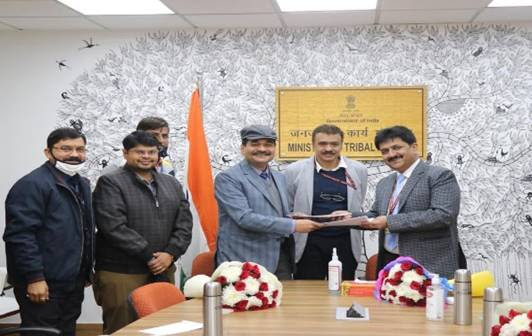 Out of 28 States, where EMRSs are being established, the NESTS has executed MoUs with 21 State/UT Governments as on date including Government of Kerala.

The signing of the MoU is the first step towards positioning of EMRSs as harbinger of tribal education in the remote tribal hinterlands and it would bring all States on a uniform and mutually agreed platform.

In his message, Arjun Munda, Minister of Tribal Affairs said that with the overarching vision of the Prime Minister to usher all round development in tribal areas, the scheme of EMRSs was revamped in 2018-19 to improve the geographical outreach of the programme and introduce several qualitative changes to improve learning outcomes in the schools.

By the year 2022, there is a target of establishing 740 EMRSs across the country covering every block with 50% or more ST population and 20,000 or more tribal persons, benefitting around 3.5 lakh tribal students.

In her message, Smt Renuka Singh Saruta, Minister of State said that with this strategic partnership with State Governments, efforts are being taken to ensure holistic development of the students in both academic and extracurricular sphere will bear fruits. The EMRSs have become beacon of success in the tribal areas and emerging as a premier institution of Nation Building.

Sh. R. Subrahmanyam, Secretary Ministry of Tribal Affairs in his message conveyed that as part of revamping of the programme, several systemic changes have been introduced including construction of schools by central agencies, CBSE affiliation of the schools, recruitment of regular teaching and non-teaching staff, designing of school uniforms, capacity building of teachers, leadership development of principals, introduction of online/digital technologies in the schools.

Sh. Puneet Kumar, Principal Secretary ST development department, speaking on the occasion thanked the Ministry of Tribal affairs, Government of India for the overwhelming support through EMRS Scheme on behalf of the Government of Kerala and said that he looked forward to continued cooperation and support for the benefit of the tribal students by improving standards of teaching and improvements in Infrastructure of EMRSs.

EMRSs are a flagship intervention of the Ministry of Tribal Affairs to provide quality education to tribal students in remote tribal areas. The programme being implemented since 1998 have created a niche in the tribal education landscape of the country. However, the scheme was revamped in 2018 to improve the geographical outreach of the programme and introduce several qualitative changes to improve learning outcomes in the schools.

Currently there are 588 schools sanctioned across the country in 28 States/UT with around 73391 students enrolled in the Schools. Another 152 schools shall be sanctioned by the year 2022. Details of the schools can be seen on the dashboard of the Ministry available at www.dashboard.tribal.gov.in.

NESTS was established in April, 2019 as an autonomous organization under the Ministry of Tribal Affairs to run and manage the schools. Ever since then, In order to ensure adequate availability of financial resources in the schools, the recurring cost per annum per student was enhanced to Rs. 1,09,000.00 in 2018-19 from the existing unit cost of Rs. 61,500.00 in 2017-18.With the increase in recurring cost and the construction grant it was imperative that the qualitative improvements in the running and management of the schools are initiated simultaneously. With the execution of MoU, the schools shall be eligible for higher recurring costs so as to ensure qualitative improvements in the schools.