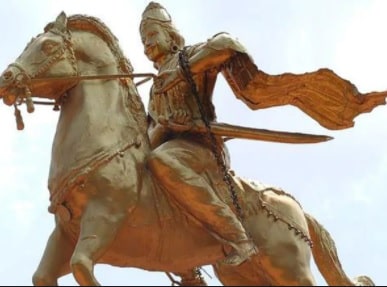 At a time when many Western Utter Pradesh farmers led by Rakesh Tikait were agitating against farms laws, Prime Minister, Shri Narendra Modi is slated to lay the foundation stone of Maharaja Suheldev Memorial and development work of Chittaura Lake in Bahraich on February 16 through video conferencing.

Though the event was being executed by UP Chief Minister Yogi Adityanath who had envisioned it long ago in 2014 when he was BJP MP, it is taking place in Bahraich, Uttar Pradesh and it marks the birth anniversary of Maharaja Suheldev.

That Yogi Adityanath will be present on the occasion is one side of the story.Its another side mirrors various caste groups who have always attempted to appropriate Suhaldev as one of their own. The Jats such as Tikait also consider him as their own ‘king.’

Historically, writers have identified Suhaldev as “ Bhar Rajput”, “Rajbhar”,”Tharu” community. So much was his popularity as a Hindu king of Bahraich that in 1940, Guru Sahay Dikshit Dwijdeen, a local school teacher of Bahraich, composed a long poem Sri Suhal Bavani.

After the religion- based partition of India in 1947, the first printed version of the poem appeared in 1950. Arya Samaj,Ram Rajya Parishad and Hindu Mahasabha Sangathan promoted Suhaldev as a Hindu hero.Why?

If the legend ( Wikipedia) is to be believed, Ghazi Salar Masud, a nephew of Mahmud of Ghazni, invaded India at the age of 16.He crossed the Indus River,and conquered Multan,Delhi, Meerut and finally Satrikh. At Satrikh, he established his headquarters, and despatched armies to defeat the local kings. Sayyad Saic- up- Din and Mian Rajjab were dispatched at Bahraich. The local Raja of Bahraich and other neighbouring Hindu kings formed a confederation, but an army led by Masud’s father Gazi Salar Sahu defeated them.

Nevertheless, they continued to threaten the invaders, and therefore, in 1033 CE,Masud himself arrived in Bahraich to check their advance.Masud inflicted defeat after defeat on his enemies, until the arrival of Suhaldev.”Suhaldev’s army defeated Masud’s forces, and Masud was killed in a battle at Bahraich on June 15,1033”, mentions Wikipedia.

Against this backdrop, several Hindu organisations including the RSS have declared him as a Hindu hero.Now, the Yogi government is leaving no stone unturned to build a memorial in his name, an initiative no community can oppose.In fact, it is meant to win over the OBCs including Jats, a large group of whom was backing Kisan Andolan led by Tikait.

The complete project will include installation of an equestrian statue of Suheldev and development of various tourist amenities like cafeteria, guest house and a children’s park.

Since his devotion and service to the country has been a source of inspiration for many Hindus today and with the development of this memorial site, the country may be able to get better acquainted with the heroic saga of Maharaja Suheldev. It would also further enhance the tourist potential of this site.