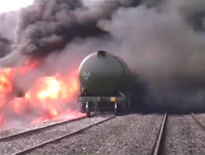 Preliminary inquiry by the railway officials indicate that the fire in the engine of the coal laden goods train going to Bhilai from Rajrappa on Sunday had erupted from inside the battery centre.

The flames of the fire spread causing panic among the railway staff of the Ranchi railway station.Though the fire was spotted at 5,30 pm,the fire brigade reached 1.15 hour later.”The fire extinguishers were not working.As a result,the fire leapt forward and caught the entire engine”,said an eye witness.

The fire was extinguished by 7.27 pm.

The Divisional Ralway Manager G Mallaya has ordered an inquiry into the inferno.”There was a shortage of fire extinguishers.Even fire brigade reached late”,says Mallaya.

In another incident at Balsiring near Lodhma railway station in Ranchi district on the same day, the Jammu Tawi-Hatia-Rourkela Express hit a truck at an unmanned level-crossing injuring the train’s assistant driver and the truck driver.

Though no train passenger suffered any injury,the truck driver was admitted at a hospital.His condition was described as critical.