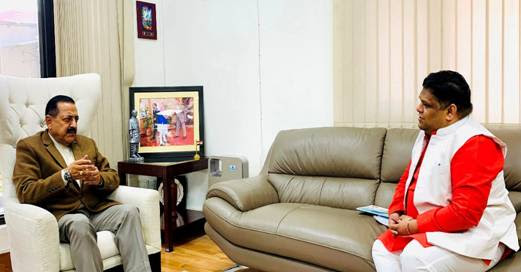 The law has now become applicable in the Union Territory of Jammu & Kashmir, following the abrogation of Article 370 and the State becoming a Union Territory.

Chairman, National Commission for Protection for Child Rights (NCPCR), PriyankKanoongo met Dr. Jitendra Singh and discussed the important issues concerning the rights of children in Jammu & Kashmir and Ladakh, which had emerged from the analysis recently conducted by the NCPCR. He also emphasised the need for strict implementation of Juvenile Justice Act, which now stands extended to the two UTs.

This, by implication, means that anyone responsible for inducing or using children in stone pelting or any other violent activity will face serious action under the law.

Dr Jitendra Singh appreciated the NCPCR efforts for the protection of child rights in the country, including in the newly created Union Territories of Jammu & Kashmir and Ladakh. He said, using or inducing children to stone pelting is not only a crime against law but also a crime against humanity.

Further, NCPCR chief Kanoongo discussed with Dr. Jitendra Singh the implications of the Protection of Children from Sexual Offences (POCSO) Act, 2012 which is also now applicable in Jammu & Kashmir and Ladakh. He also briefed the Minister about various awareness workshops and programmes conducted by the NCPCR to sensitize the stakeholders in different districts of Jammu & Kashmir.