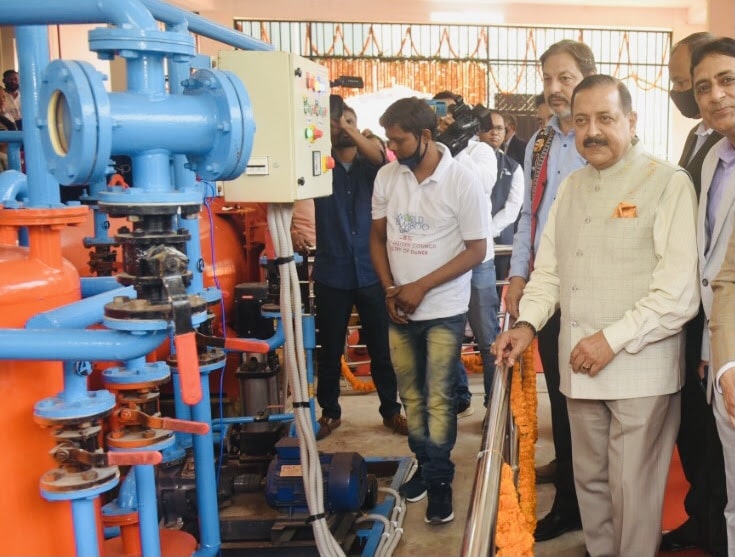 Later, on Thursday,he went around the Plant, interacted with technicians and artists and was also called upon by a group of officers from Jammu & Kashmir who are currently on a Bamboo Study tour of the Northeast.

Advisor North Eastern Council (NEC) Air Marshal (Retd.) Anjan Gogoi and CMD of the Centre, Shailendra Choudhary accompanied the Minister. A display of a wide variety of bamboo products was also put up in the premises.

Later addressing a press conference, Dr. Jitendra Singh said, bamboo is going to play a lead role in the post-COVID economy, not only for Northeast but, in fact, for the whole of India. He explained this further by saying that in the post-COVID era, economic resurgence will keep looking for unexplored and alternative avenues of trade and business and it is here that the huge Bamboo reserves in the North Eastern region, which had remained underutilised for all these years, will come handy and become tool of economy generation.

Dr Jitendra Singh further revealed that in a bid to make aware about the versatile applications of bamboo and its cost-effective products, the North Eastern Council and the Ministry of DoNER have initiated a country wide drive and are also encouraging Start-Ups and new entrepreneurs to explore business opportunities through bamboo. As a part of this, he said, the Union Territory of Jammu & Kashmir will set up three Bamboo Clusters through technical knowhow and collaboration from North East Cane and Bamboo Development Council(NECBDC). Each of the three clusters will be devoted to the production of Agarbatti, baskets and charcoal respectively, he added.

Dr. Jitendra Singh said, Prime Minister Narendra Modi has given the highest priority to the growth and development of the North Eastern region and it was a path-breaking decision under his leadership to exempt home grown bamboo from the purview of the 100 year old Indian Forest Act. This will help in bringing ease of doing business in the bamboo sector for the young entrepreneurs, he said.

At the same time, during the COVID-pandemic, Dr. Jitendra Singh informed that the import duty on Agarbatti coming from other countries has been hiked to nearly 35%. This will discourage import of bamboo made Aggarbatties and encourage domestic production in keeping with Prime Minister Modi’s call for “Atma Nirbhar Bharat”.