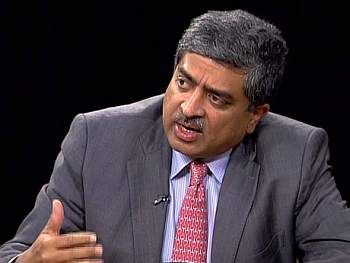 UIADI Chairman Nandan Nilekani today re-affirmed his commitment to complete the Aadhaar project, helping scaling up Aadhaar-attached schemes in the wake of the Centre deciding to add 78 more districts from across India from July 1.

Expressing happiness at the pace of enrolment in Jharkhand, Nilekani suggested acceleration to complete enrolment of the rest one crore citizens in the state.

Assuring complete cooperation to his favourite UIADI project, Jharkhand Chief Secretary R S Sharma promised of acceleration of enrolment, its application of schemes and scaling up the schemes.

Nilekani suggested the Aadhaar holders to laminate the bottom portion of the card to make it durable.He suggested that any one seeking Aadhar can download from http://eaadhaar.uidai.gov.in, take a print out and laminate it if anyone missed getting it by post.

He reiterated that Aadhaar is not a Citizen Identification as boldly written as in the Aadhaar card itself.

Nilekani’s tone sounded emotional when he said he was missing R S Sharma as UIDAI’s first Director General in Delhi.

“It was a very difficult decision to relieve him, but in the larger interest of Jharkhand and its development, we thought it that he is the best officer to serve the state. He appealed to the officials and the media alike to support him 200 per cent (to take the state on the path of development).”