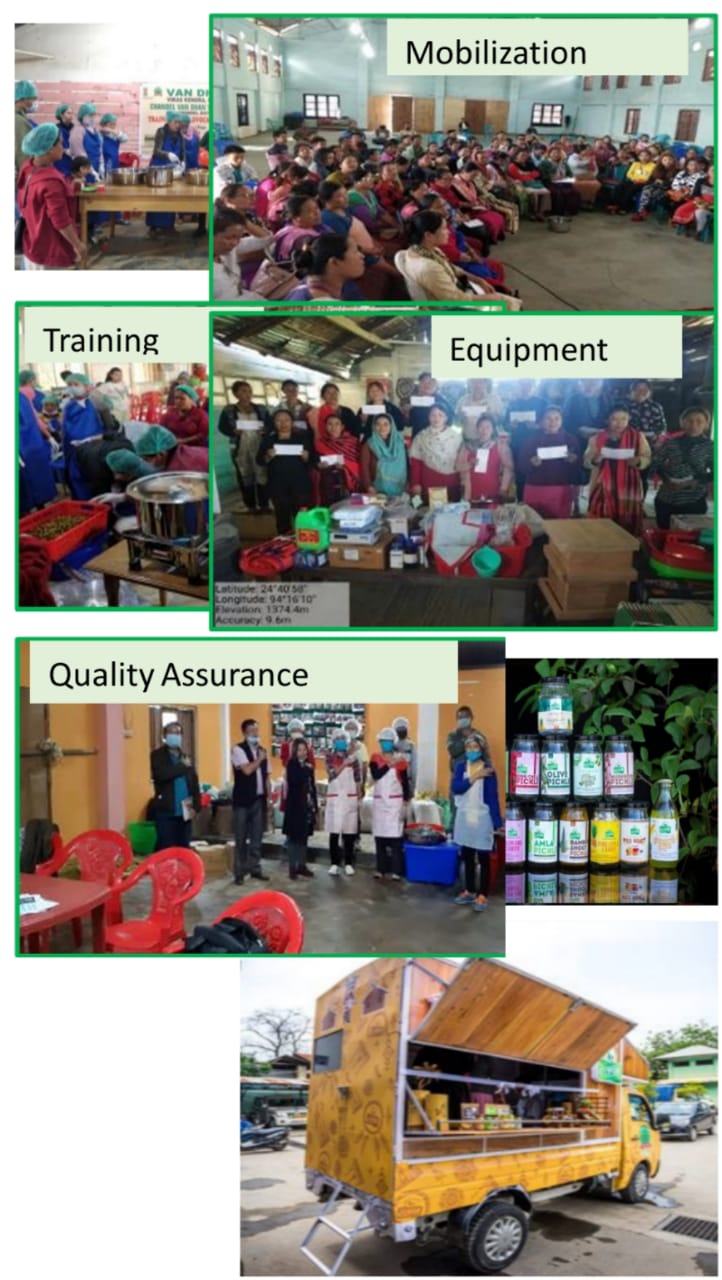 Since its inception as the nodal agency working in the area of tribal upliftment, TRIFED has been implementing several programmes and initiatives. The focus of these initiatives is to make India self-reliant under the Atmanirbhar Abhiyan, with the motto, Go Vocal for Local Go Tribal – Mera Van Mera Dhan Mera Udyam.

One major scheme that has contributed to increasing employment and income generation among the tribal population is the Van Dhan tribal start-ups programme, a component of the The ‘Mechanism for Marketing of Minor Forest Produce (MFP) through Minimum Support Price (MSP) & Development of Value Chain for MFP’ Scheme.

The Van Dhan Vikas Yojana is a programme for value addition, branding & marketing of Minor Forest Produces by establishing Van Dhan Kendras to facilitate creation of sustainable livelihoods for the forest-based tribes.

Manipur, in particular, which has emerged as the Champion state where the Van Dhan programme has emerged as a major source of employment for the local tribals. Since the time that the programme was launched in the State in October 2019, 100 Van Dhan Vikas Kendras have been established.

These constitute 1500 SHGs and are benefitting 30,000 tribal entrepreneurs, who are involved in collection, processing, value adding, packaging and marketing of value added products from Minor Forest produce.

With an active cooperation and participation of the state government at every level, the Van Dhan Kendras in the state of Manipur have turned out to be a model enterprise for the rest of the country.

The nodal office, along with the implementing agencies and ample support from District administration and other stakeholders, have been instrumental in mentoring the tribal entrepreneurs through team meetings, Advocacy, workshops, trainings.

Various Cluster-wise Training/ Skill development and upgradation for value addition of NTFPs and entrepreneurial management have also been organised at the district levels through collaboration with existing companies such as Zingran Foods, Meira Foods, Kangla Foods, and Thangjam Agro Industries (Likla).

Apron, caps, gloves, masks are also provided for hygienic handling of Van Dhan products. Food Hygiene and safety standards have been emphasized. Support and help has been arranged for innovative and attractive branding and packaging for the value-added products.

Till date, 77 Van Dhan Kendras have become operational and have launched their products. The beauty of the whole exercise is that it has managed to create market linkages. Many of these tribal enterprises are connected to markets.

In fact VDVKs of 14 Districts are currently participating in a State level Exhibition - Mai-own 2021 which is going on in Imphal from 16th to 22nd March, 2021 inaugurated by the Hon'ble CM of Manipur.

What has stood out in the case of Manipur is the exemplary food safety and hygiene standards adopted by these 77 centres that have been established. High standards for ensuring food safety have been put in place by tying up with the Food and safety officer of Health Department for continuous improvement in the value addition operation through quality checks at the VDVK level.

VDVK has also obtained certifications such as Food Safety & Standards Authority of India (FSSAI) for better product acceptance. Another notable feature of these processed products is the superb attractive packaging of the processed products such as Amla juice, tamarind amla candy and plum jams, and the innovative branding and marketing of these products. A mobile van service has also been started in one of the districts to ensure the selling of these products!

With the income and livelihoods of these tribal people being optimised and enhanced due to the sale of these products, it must be mentioned that all this has been possible because of the sincere efforts of all those involved.

The sincere efforts, dedication and determination of the tribal entrepreneurs in working collectively starting from the the collection of MFPs through sustainable harvesting, value addition, packaging, branding and marketing of the products, along with the support of the state government and nodal office, has succeeded in making this initiative a huge success.