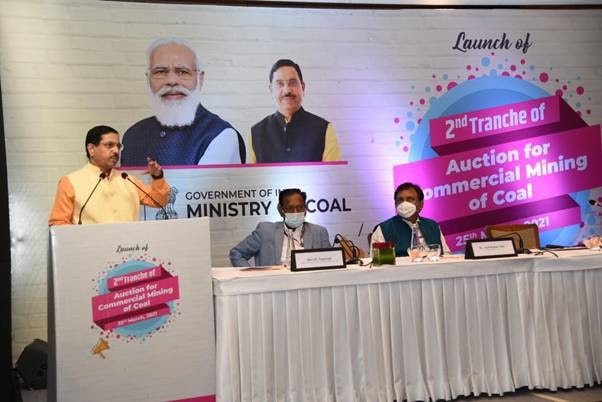 India launched its 2nd Tranche of auction for commercial coal mining offering 67 mines for sale of coal, today. This is the highest number of mines on offer in a particular tranche of auction after the commencement of the auction regime since 2014. Union Coal Minister ShriPralhad Joshi launched the auction process in a programme held in New Delhi. Shri Amitabh Kant, CEO NITI Aayog and Shri Anil Kumar Jain, Secretary (Coal) were also present in the function.

Out of the total 67 mines offered by the Ministry of Coal, 23 mines are under CM(SP) Act and 44 under MMDR Act. The coal mines on offer are a mix of mines with small and large reserves, coking and non-coking mines and fully and partially explored mines spread across 06 States Chhattisgarh, Jharkhand, Odisha, Madhya Pradesh, Maharashtra and Andhra Pradesh.

“We are making coal the driver of economic activities in the country. There are huge opportunities that the Indian coal sector is offering. Therefore, I invite investors to come and be a part of vastly untapped coal reserves in the country. Grow your businesses and take India along on the growth course,” Shri Joshi said while launching the auction process.

The Coal Minister also said looking at the past success, the government is moving towards adopting a ‘Rolling Auction’ mechanism for conducting future auctions. Coal is the first mineral resource where Rolling Auction mechanism is being implemented in which a pool of coal blocks will always remain available for auctions.

“With rolling auctions, we will upload a comprehensive list of mines along with key technical data and bidders can submit their preferences for the mines to be included in the next tranche of auction. This would be a continuous process and would result in expediting the auction setup. Moreover, it will also help bidders in planning better and would further enhance transparency in the system.” said Shri Joshi.

Shri Joshi also said that along with promoting commercial coal mining, the government is also looking at reforming the existing e-auction mechanism of Coal India Limited and considering clubbing different e-auction windows of CIL into one. This will help in moving towards One Price for One Coal Grade. Selling coal at market-determined prices through one e-auction window would help in simplifying the system and promoting transparency.

“Start of commercial coal mining is the most revolutionary and progressive measure taken in the coal sector of the country. It will bring the leading miners with latest technologies and cost competitiveness in the Indian coal sector. Indian coal sector will witness huge improvements in productivity and modernisation.” CEO NITI Aayog Shri Amitabh Kant said in his address.

“In this tranche of auction, special emphasis has been given on protection of the environment. Coal blocks have been selected in those areas where forest cover is low, coal quality is good, mines are close to the infrastructure facilities and resettlement & rehabilitation has to be done at the minimum. More coking coal mines have been offered so that India’s import of coking coal can also be reduced,” Secretary (Coal) Shri Anil Kumar Jain said while speaking in the function.

Notably, 19 mines were successfully auctioned in the first-ever tranche of commercial coal mining auctions held last year with the premium quoted by the successful bidders ranging from 9.5% to 66.75%. The agreements between the Ministry of Coal and the successful bidders were signed in January this year. States will fetch around Rs. 7000 crores of revenues from these auctions considering production at peak rated capacity of 51 Million Tonnes Per Annum (MTPA).