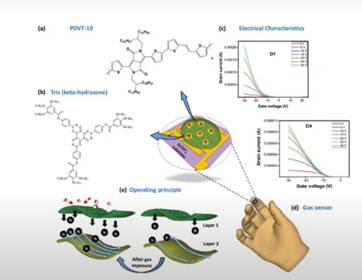 cientists have developed an electronic nose with biodegradable polymer and monomer that can detect hydrogen sulphide (H2S), a poisonous, corrosive, and flammable gas produced from swamps and sewers.

H2S is the primary gas produced from the microbial breakdown of organic matter in the absence of oxygen, and this necessitates easy detection of its emission from sewers and swamps.

Responding to this challenge, scientists from the Centre for Nano and Soft Matter Sciences (CeNS), Bangalore, an autonomous institute of the Department of Science & Technology, Government of India, in collaboration with their counterparts from Saudi Arabia, have developed an exceptionally sensitive and selective H2S Gas sensor developed by impersonating the neuron responsible for identification of airborne molecules or olfactory receptor neuron (ORN).

The impersonation of ORN with the help of an organic electronic device consisting of biodegradable polymer and monomer under Dr. ChannabasaveshwarYelamaggad from CeNS and Prof. Khaled N. Salama, Sensors lab, Advanced Membranes, and Porous Materials Center, King Abdullah University of Science and Technology (KAUST), Saudi Arabia has been published in the journals ‘Materials Horizon’ and ‘Advanced Electronic Materials’ recently.

The fabricated sensor consists of a heterostructure consisting of two layers – the top layer a monomer and is realized with a novel chemical tris (keto-hydrazone), which is both porous and contains H2S specific functional groups, and the bottom layer is the active channel layer which plays a key role in altering the current and mobility of charge carriers.

Thus the synergistic combination helps to pre-concentrate the H2S molecules, initiate an acid-base chemical reaction, and thereby brings a change in the majority carriers (holes) of the channel region in the device. The capacitance sensor (a sensor that detects nearby objects by their effect on the electrical field created by the sensor) developed by the scientists showed an excellent sensitivity in detecting H2S gas with an experimental limit of detection of around 25 parts per billion. It also has high ambient stability of around 8 months without compromising sensing performance.