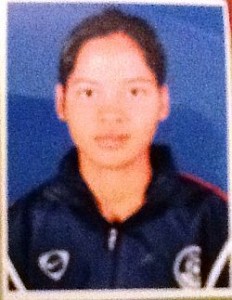 It’s a good news.Yet another Jharkhand girl Rashmi Kumari will lead India’s team to play the first World School Footbal Cup under 18 tournament slated to be begin on April 14 in Paris (France).

The tournament is slated to start from April 14 to end on April 22.”The team has already reached Paris”,said Sports Authority of India’s Ranchi based football coach Sushil Kumar Verma.

Rashmi,daughter of Uttam Kumar Singh Munda,who is clerk in the Accountant General’s office in Ranchi,is among three of total 18 member team who are trained by Verma at SAI,Ranchi.The other two players are:Pushpa Kumari,Sumitra Marandi.

“When she was a kid.she used to see her brothers playing football.Slowly,she began to play football and now she is leading the country’s team’,said her father Munda.