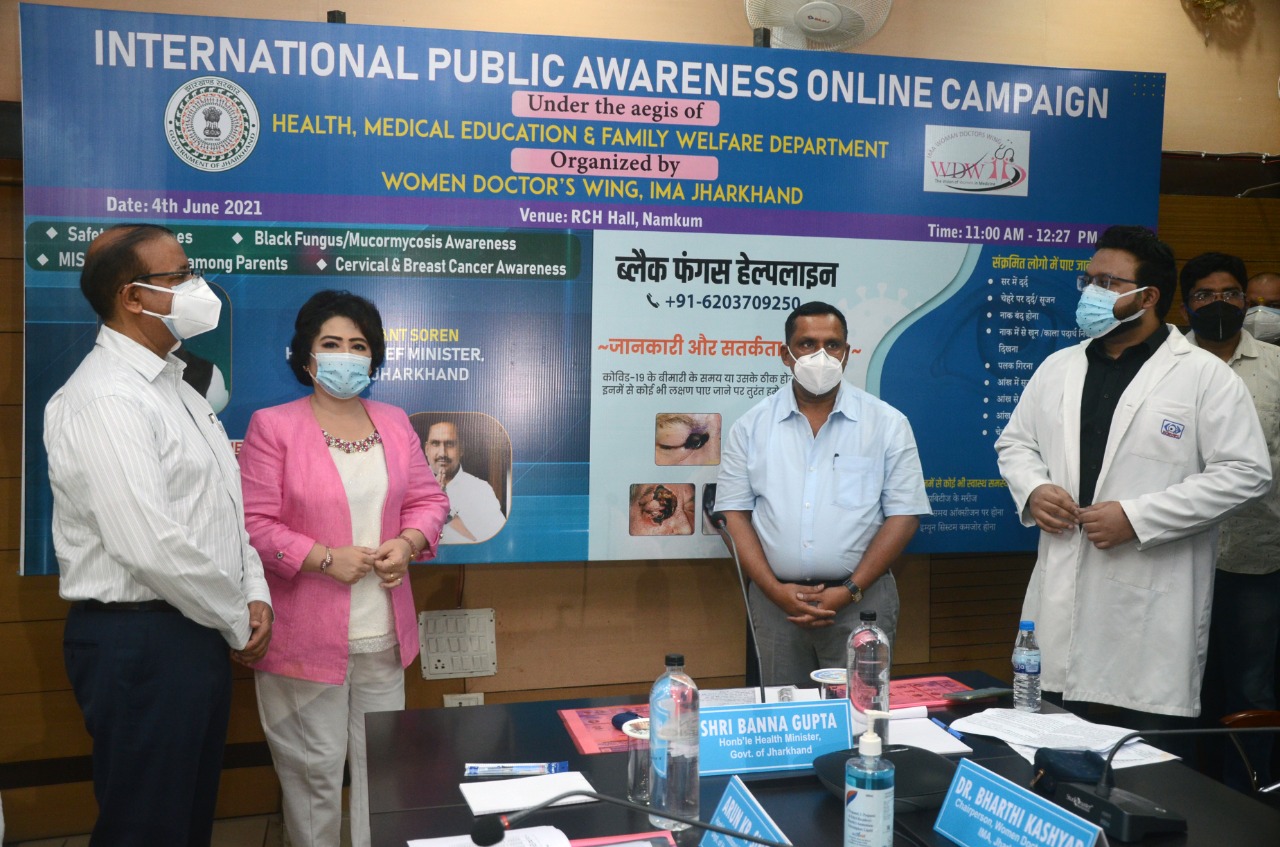 *Seen in these pictures are (Left to Right) Jharkhand Additional Chief Secretary Arun Kumar Singh, Dr Bharti Kashyap and others.

* May 31,2021:Parents of Sumit Agrawal,a patient of black fungus and Corona positive wept and wept after receiving no response to their repeated calls for help from doctors of RIMS,Ranchi.

*June 1,2021: Five students and a doctor of Sadar Hospital were thrashed  after a Corona positive patient who was suspected to be suffering from black fungus, died.

*June 3,2021: Six nurses were beaten up by parents and relatives of a Corona positive and suspected patient of black fungus Suhit Khan who had breathed his last in a private hospital in Ranchi.

Three incidents across the capital city of Jharkhand have understood and felt the need for a help line in the state to speed up treatment of the Corona positive and black fungus patients.A family of reputed doctors has taken up the onus.

A press release issued by Kashyap Memorial Eye Hospital claimed that an “aggregating to more than 2 lakh, were galvanised to fight Covid vaccine hesitancy,fear and misgivings on the side effects of Covid 19 vaccines. “

Notably,Civil Surgeons of all districts reportedly joined the programme online from across the state district headquarters. The state has the capacity to vaccinate 2.46 lakh beneficiaries though actual numbers are less than 50 percent.

The Kashyap family doctors who organised the  ‘Mass Online Awareness Campaign’ were :

As it is,black fungus or Mucormycosis,is a rare disease .It is known to affect people who have underlying health problems like uncontrolled diabetes,HIV, cancer or are taking medicines that lower the body's ability to fight germs and sickness.

To combat the disease, it is important to understand the signs and symptoms of black fungus infection because it can turn dangerous if left untreated. Mucor primarily affects the nose and sinus. Common symptoms include nasal congestion, difficulty in breathing, headache, running nose, facial pain, swelling in cheeks and eyes , loss of vision and pain in eyes etc. Consult your doctor or go to an ENT specialist at the earliest and refrain from self medication, Dr. Bibbhuti Kashyap stressed.

“Patients recovering from Covid need to follow good hygiene practices in everyday life and should stay away from areas with high dust pollution levels. Unfortunately a fear psychosis has come to prevail. People with slightest irritation in their eyes are fearing black fungus infections. The Black Fungus helpline has been launched today to dispel many of the fears and misgivings surrounding black fungus”, Dr.Bibhuti added.

A number of suggestions were given by eminent doctors and specialists from the country and abroad, during the online programme. As pointed out by Dr.Ravi Kashyap,the Covid vaccines are safe for all including lactating mothers, pregnant women and with no side effects on menstrual health or reproductive health.”We are also going all out to dispel the many fears and skepticism surrounding vaccines. The state government is committed to ensure vaccination for all eligible age groups in a given period of time".

In Jharkhand 48 cases of Black Fungus have been identified so far. Child ICUs are fast coming up in Jharkhand with large scale training being given to doctors, including senior doctors and specialists. The entire health care system is being geared up to combat MISC in children. Proper care is also being taken to improve logistics to combat black fungus.

Regarding Cryo machines that are lying idle for want of gas cylinders in 11 districts of Jharkhand,Minister Banna Gupta said that the health department has taken initiatives to make these machines functional as soon as possible.