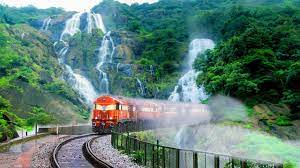 While India has been working on the emerging and pressing environmental issues engaging in multilateral forums constructively, one Indian public sector enterprise-the Indian Railways has been at the forefront of this awareness and action.

In fact, Indian Railways (IR) is undergoing a transformation in several ways. For one, it is leading the charge on environmental issues as well in many interesting ways.

Railways electrification is generally assessed from the lens of infrastructure creation leading to higher operational efficiency. But a massive push to electrification has a big second-order environment impact as well. IR consumes about 3% of India’s diesel – a full electrification will lead to not just a direct reduction of fossil fuel consumption, but savings to foreign exchange as well. The IR plans full electrification of all broad gauge routes by 2023.

We know that the two under construction Dedicated Freight Corridor (DFC) projects - Eastern (EDFC) from Ludhiana to Dankuni (1,875 km) and Western (WDFC) from Dadri to Jawaharlal Nehru Port Trust (1,506 km), will revolutionize logistics. But these DFCs are also an example of green transportation.

The network is being designed with low carbon friendly technologies and energy efficient components.

DFCs are fully electrified and designed for heavier axle load, higher speeds and long haul trains up to 1.5 km long which can be used as double stack container trains, thereby resulting in higher carrying capacity and faster movement of goods.

DFCs have adopted technology facilitating regeneration of up to 15% of energy consumed by utilizing the braking energy for traction. Various installations in the DFC network will adopt green energy so as to meet minimum 10% energy requirements through renewable sources.

An environment friendly advantage of the DFCs will be to enable modal shift of India’s freight traffic from road to rail, expected to be in the range of 30% to 40%, thus shifting cargo to a non-polluting greener transportation system.

Even earlier, as part of the Swachh Bharat Mission, IR had completed installation of bio toilets on its entire fleet. This ensures no human waste discharge from coaches on track. With this effort nearly 2,74,000 litres per day of excreta on tracks is being avoided.

Additionally, human waste led corrosion of rails and fittings costing Rs. 400 crore per annum is also avoided. This investment was also environment as well as cost friendly. In fact these bio toilets are now being upgraded to bio vacuum toilets, which will further reduce water consumption.

Another area of IR’s environment action has been the use of renewable energy including solar and wind power. About 114 MW of solar rooftop plants have been installed in over one thousand stations and four hundred service buildings.

Given that IR owns a lot of land across the country, it is using this vacant space to set up solar plants. The energy thus generated will help meet its traction power requirement. Eventually, IR alone may end up installing 20 GW of land based solar plants around the country.

Reduced energy consumption has also been achieved by the IR through 100% LED replacement. Today, all 8,000 odd railway stations in the country as well as all 20,000 odd IR buildings and installations use energy efficient LED lighting. Even the IR residential quarters now use LED bulbs. Since Indian base load power is very much coal driven, higher energy efficiency leads to lower carbon emissions from power plants.

Another big area of environment impact is plastic consumption. Given the vastness of the IR network, plastic waste management is a big challenge. The IR took a unique initiative to design a comprehensive policy on installing plastic bottle crushing machines in 2019. The policy aimed to created a self-sustaining business model focusing on plastic waste recycling. Today more than 400 railway stations have these machines.

Even during the Covid-19 pandemic, IR helped to transport food grains and oxygen around the country, which is much more fuel efficient than similar transportation by road. IR has helped transport more than 75 lakh tonnes of good grains as well as 20,000 tonnes of liquid oxygen since April.

These relief operations have not just been a saviour for Indians but also reduced immense load on diesel dependent road transportation options.

IR has been working on new services like the Vande Bharat Express and High Speed Rail. These train sets are not just fuel efficient, but will also end up replacing air travel on many sectors once they are fully operational. Reducing air traffic load will lead to lower carbon dioxide emissions. High speed rail produces only one-third of the carbon emissions of car travel and one-quarter the emissions of an equivalent trip by air per passenger.

In the last seven years, IR has indeed reimagined environment consciousness in several innovative ways. It has recreated new experience and concepts at a rapid pace, using new financing models other than budgetary means. Finally, these efforts will help reduce dependence on fossil fuels and hence restore natural resources.

The Indian Railways aims to become a net zero carbon emitter by 2030. This will be a significant contribution in the Indian journey to meet the sustainable development goals over this decade.

(Author Aashish Chandorkar is Director, Smahi Foundation of Policy and Research and Co-Founder of the Bharatvaarta podcast. He writes on public policy and is based in Pune.)