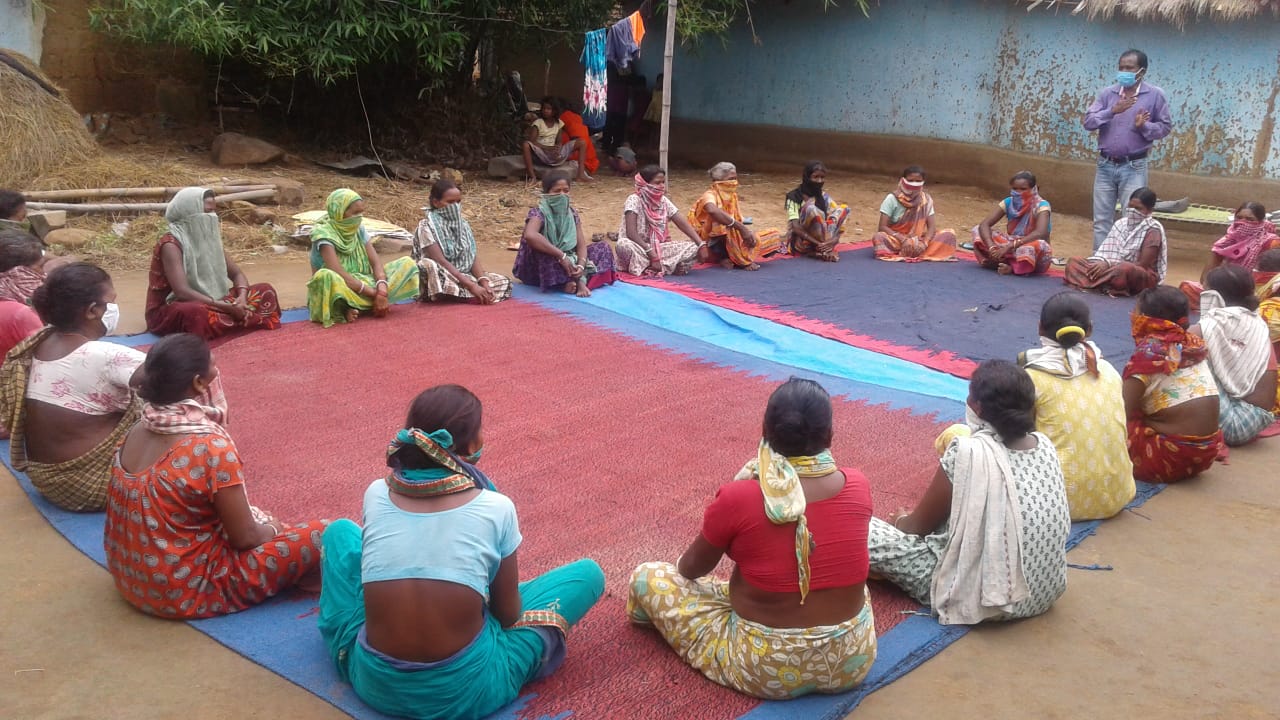 In the courtyard of a house, in the Majhgaon block of West Singhbhum district of Jharkhand, 20 women who are members of JSLPS Sakhi Mandal/Aanganwadi Sevika/SAHIYA Didis are sitting in a circle. In present-day Jharkhand, they are called “Vaccine Social Mobilizers”.

They are from the same village where they are working in a different capacity with the state government. They are planning for an awareness drive to be carried out in the nearby locality, where a major portion of the population doesn’t speak HINDI. They need to be motivated in their regional language.

The tribal people constitute a large proportion of Jharkhand’s population.So, it is important to build a trust factor amongst them in order to foster change. Regional languages like Ho, Mundari, Kuduk, Sadari, Santhali, Nagpuri, Panchparganiya, Khortha and other tribal languages are prominently used for social interaction.

After the rollout of the vaccination drive in the state, one of the biggest challenges for the government was to generate awareness around the vaccine. Like other parts of the country, Jharkhand too was affected by the myths and fallacies related to vaccination.

Given this situation, the government of Jharkhand started an intensive awareness drive across the state. Officials were directed to ensure that rumours were done away with . Regional languages were used in the awareness drive and Panchayat representatives were roped in.

*Creating a team of Social Mobilizers*

In every district & block of Jharkhand, a team of social mobilizers was constituted and trained by NHM to become master trainers. These master trainers further worked on training ANMs, Sahiya Didis and other stakeholders to be social mobilizers. This helped the government build a big team of social mobilizers at the panchayat and village level. Since these women are a part of the same society in which they are supposed to generate awareness, it was easier to connect with the local people and establish a sense of trust in them. This initiative helped the state government motivate a large number of people to get vaccinated.

*Newspaper ads in all regional languages – A rare sight*

Countering myths related to vaccines and mobilizing the population to the vaccination centre was a tedious task for the administration. Making the right move at the right time resulted in a successful mass vaccination drive. In May, the government released a series of newspaper ads in different regional languages like Olchiki, Mundari, HO, Kurukh, and Hindi. These ads were published in all the local and national newspapers. This was a one of its kind initiative taken up by the Government of Jharkhand.

*Appeal in regional languages by all the deputy commissioners*

Apart from conducting field visits, Deputy Commissioners across districts released videos in regional languages through their social media platforms. These videos were circulated among different WhatsApp groups, and Sakhi Mandal Didis involved in door to door campaigns used these recorded videos to motivate people to get vaccinated.

A series of posters, banners, and digital informative cards were created in multiple languages to educate people about the facts of vaccination. Many myth-busting banners were pasted across all the panchayats in Hindi andother regional languages.

Also, wall paintings related to COVID-19 appropriate behaviour and vaccination were put up across the state. In addition, leaflets in 5 different regional languages were developed and they were distributed by SAHIYAs during their door to door awareness campaign.

*Miking and Nukkad Natak organized across different parts of the state*

The administrations also utilized traditional announcement systems in many parts of the state. Speakers mounted over e-rickshaws and tempos were a common sight in rural parts of Jharkhand. Audio-visual content developed in local languages by famous personalities is also rolling out through television, radio and other communication media.

*Appeal by the Chief Minister*

The Chief Minister himself proactively took part in the awareness drive and released multiple videos and awareness posters on his social media platforms. A video published on the Chief Minister’s social media handle showed him getting vaccinated. This video was widely circulated over social media and worked as a booster for transforming the vaccination drive into a mass movement.

In his appeal, Chief Minister, Mr Hemant Soren asked people to get the vaccine administered without any hesitation. He also asked people to motivate others in their families to visit the vaccination centres. He further added, “these vaccines have been bought through the taxpayer’s money, to safeguard our state from COVID19, everyone should get vaccinated at the earliest. It causes no harm.”