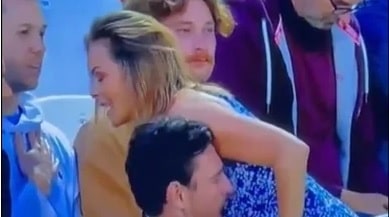 A video of a man behaving inappropriately with a woman during live Vitality T20 Blast match has surfaced on social media.

This incident happened during the Surrey vs Middlesex match which was played on June 25, 2021, at the Kennington Oval in London.

The match saw Surrey winning the toss and electing to field first. Middlesex batting was shouldered by Steve Eskinazi’s 64 (7 fours and 1 six) and Daryl Mitchell’s 58 (5 fours and 3 sixes), while Luke Hollman contributed 19 runs and Chris Green made 15. Middlesex managed to post 174/7 in 20 overs.

Unfortunately, as the match advanced to a near finish, a cameraman caught a male spectator behaving inappropriately with a woman attendee. This video has gone viral on social media.

The woman wearing a blue dress can be seen talking to gentlemen behind this person and is leaning over his shoulder to do so.