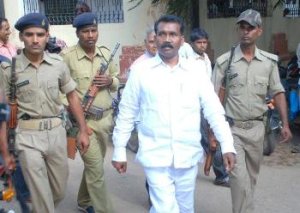 Former Jharkhand CM Madhu Koda will come out of ranchi based Birsa Munda jail on Thursday.

A group of his supporters led by his wife Gita Koda are planning to greet him and take him from jail to his house in Ranchi.Already his official residence in the Booty officers’ colony,was buzzing with activity with cars and SUVs parked outside.

Jharkhand High Court had on Tuesday granted a three-week provisional bail to him for treatment of his ailing mother in a case connected with rural electrification scam.

The bail was granted by Justice HC Mishra for three weeks.