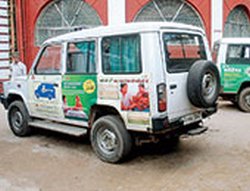 Barhet village in Sahebgunj district is numb.A driver of the state health department is in jail on the charge of raping a woman on the Mamata Vahan.

The incident took place on Thursday when Mohammed Siraz was driving the Mamata Vahan(Bolero-JH04 D 9970).”On the way he picked up a woman in Kusma village.Minutes later,he raped her inside the Mamata Vahan”,states FIR filed at Barhet police station.

Incidentally,Mamata Vahan was launched by the state wing of the National Rural Health Mission as a free referral transport service to ferry expectant mothers to hospitals, aimed at encouraging institutionalised deliveries to reduce mother and child mortality in 2010.

As per the project,every block was given a vehicle fitted with a bed to carry pregnant women.”But Siraz used the same bed to rape the woman”,said Ashok Murmu,a relative of the victim.