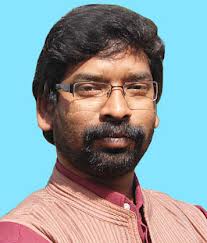 He went to climb up the ladder to become chief minister.But in the process ex Deputy CM Hemant Soren lost his seat of power.

A few days back he moved around in Ford Endeavour with a security escort.Then,he toppled the 28-month old Arjun Munda government on January 8,went to Delhi,talked to the Congress leaders and actively engaged himself exploring a government backed by the RJD,Independents and the Congress. But the Congress led regime preferred to impose the President’s rule.

Now,since the President’s rule is in force,he has to be bereft of power.This has left him angry.”We have done what we had to do.Now,the Congress has to take the lead in forming the government”,says Soren.

Within the JMM a section of the MLAs including ex ministers Hemlal Murmu and Mathura Mahto were cut up with him.Though none of them were ready to speak in public,one of Mahto’s supporter’s cribbed:”This over ambitious and immature man with the backing of his father had burnt his own house”.