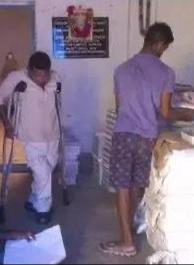 When I was a 12th standard student, our botany lecturer asked a guy sitting in front “Who’s the father of taxonomy?”. The boy didn’t know - he muttered, “I only know the father of Preethi”. Preethi was the lecturer’s daughter ! It didn’t strike me then - but over the years, I couldn’t help but notice, that subjects always had fathers - from taxonomy to toxicology. What if there was a mother?

Sivakrishna Iyer Padmavathy, was born to a barrister in 1917 towards the fag end of World War I, and  a year before the Spanish flu swept the world. She was intelligent and aced the exams , thus landing a seat in Rangoon medical college. When she completed MBBS, the clouds of war had been looming on the horizon. Japan attacked Burma in 1942, in their quest for global dominance. The Imperial Japanese army was notorious for its war crimes. The menfolk of the family couldn’t run away - but hurriedly sent Padmavathy  across the border to India. Overnight, life had changed. She wasn’t sure if she would see her homeland again.

A lesser mortal would have craved stability. S Padmavathy didn’t just find refuge in our country , but also in medical books. She flew to Edinburgh for post graduation, where she developed a keen interest in matters of the heart. No - not the “normal” kind , but Cardiology. She then hopped across the Atlantic, to land in Johns Hopkins University where she learnt pediatric cardiology under the legendary Dr Helen Brooke Taussig. She then went on to learn adult cardiology under another pioneer Dr Paul White in Harvard.

After completion she went back to Burma , only to be told that she was “overqualified” and had no job ! Burma’s loss was India’s gain. She got appointed as lecturer in Lady Hardinge Medical college and quickly became professor. Unlike the west, India had a  tsunami of Rheumatic heart disease, which fascinated her and became her lifelong focus. Back in those days, women didn’t like to consult male doctors. Lady Hardinge was by women for women - an idea Dr Padmavathy didn’t endorse. Despite objection by old timers who saw LHMC as the last bastion of women, she opened a cardiac clinic that served everyone.

Soon she got a grant from Rockefeller foundation and started a cardiac catheterisation lab, a place where men sought to work under her tutelage. She had almost single handedly changed the gender equation in the Indian cardiology scene, which was nascent then. She founded the All India Heart foundation and soon moved to Maulana Azad medical college, as the government sought to give a bigger platform for her services.

Padma Bhushan and Padma Vibushan soon followed. After retirement, as you might guess, she didn’t relax - she started the National Heart Institute in Delhi. It had become famous, thanks to her leadership.

She loved her profession and her patients.She didn’t just have a laser sharp brain and a heart of gold, she also had nerves of steel. When an MP was admitted to the National Heart Institute, Prime Minister Narasimhra Rao went to meet him. His security personnel went inside the hospital with sniffer dogs - to ensure the Prime Minister’s safety. The feisty Dr Padmavathy refused admission to the sniffer dogs and the PM !

Even at the ripe old age of 90, she continued academics by joining European Society of cardiology - which honored her for being the senior most member of the organization.She survived the first pandemic and couple of World wars, but the second one -Covid - got her. She passed away in August 2020 at the age of 103.

At long last, the world called her the Godmother of cardiology - for she had birthed Cardiology in India. So the next time you wonder, if there’s a mother of any field, remember the name - Dr S.I. Padmavathy.