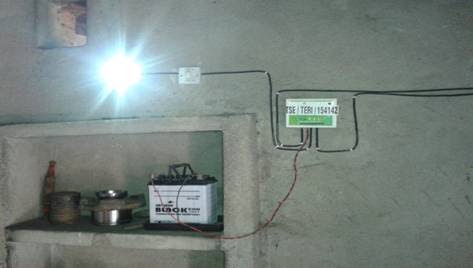 In some of the backward and remote hamlets of India, CIL and its subsidiary units are bringing about tangible improvements in basic amenities and the livingstandards of the villagers.

For instance,Eastern Coalfields Limited (ECL), one of the strong subsidiaries, is further strengthening the hands of CIL to provide solar energy, other environmental friendly amenities and quality education  facility in the remote villages of Purulia District, West Bengal.

“Now with 24x7 availability of solar unit light, I can study even in the night. I am getting better marks than earlier”, says RoshniHembram, with spark in her eyes. She is a class XI student an aspiring teacher in one of the remote coal belt villages in Neturia Block in backward Purulia District of West Bengal.

Data shows that life has started changing for her and now she is much more confident to pass her 12th exam with flying colours and to start job of teaching as her source of livelihood.

Similarly, SabaraniMondal, a teacher in Govt. school in Lalpur village of Neturia is now satisfied and says “Even with a power cut, we do not face any issue in teaching as the power backup of solar unit has now been installed in the school”.

These and many more transformational changes could be seen in the villages of Neturia Block with sincere and hard work done by Coal India Ltd. (CIL) with the help of its subsidiary Eastern Coalfields Ltd. (ECL) under Sustainable Development Goal (SDG).

ECL, operates coal mines in Purulia District which is one of the backward Districts of West Bengal. The local populace is mainly dependent either on coal operation activities or on agriculture. However, the region is drought prone and the rainfall is uneven, scanty and erratic. Most of the farmers are small and marginal and the agriculture is predominantly mono-cropped and rain-fed resulting in low farm productivity and hence leading to poverty.

Most of the households used firewood as their primary source of fuel for cooking and use of Kerosene was very prevalent. A very large percentage of households did not have toilets and resorted to open defecation. There was no computer education facility in the Govt. schools in the villages. Although efforts were made by the local Govt. villages in and around mining operation was devoid of amenities such as round-the-clock electricity, fuel for cooking, roads, proper school education, sanitation etc.

CIL, being aware of its role in Sustainable Development in coal mining, decided to take up the challenge in converting 38 villages of Neturia Block into a model. Initially, an exhaustive survey was carried out in the villages to identify the exact number of beneficiary households. The survey was conducted by the Tata Institute of Social Sciences (TISS), Mumbai, a reputed social sector educational institution. The work was entrusted to The Energy & Resources Institute (TERI), New Delhi, a leading NGO in the area of Environment and Sustainable Development.

In just a span of few years, massive transformation of these villages was done to bring the villagers into the mainstream of development. To provide solar energy based solutions to the energy needs of the households, one Integrated Domestic Energy Systems (IDES) was installed in every identified household.

A unit of IDES has components such as one Solar Household Light (SHL) system with the facility to power a LED bulb and a mobile charging socket, one Improved Cook Stove (ICS) which has a solar powered fan resulting in efficient firewood combustion and much lower smoke than the traditional Chulhas.

The solar panel and the battery pack is part of the system. Further, 110 Solar Street Lights (SSL) were installed. Maintenance of the IDES and SSL were included in the scope of the project and all the beneficiaries were provided with the contact no. of service provider for doorstep troubleshooting and maintenance. A total of 9,000 households were covered under this project component.

In order to educate the local farmers in the field of Agriculture, Greening and Capacity Building, 1,250 beneficiaries were identified from 10 villages based on the soil sample analysis with exposure visits of farmers to Birsa Agriculture University (BAU) and Institute of Forest Productivity (IFP), Ranchi.

They took up farming with completely changed environment and the new system. One of the farmers, RabilalHembram reacted with joy while narrating his experience “My back used to hurt a lot in using the traditional farm implements. Now CIL has given these new tools. Using them, I can work easily in my farm”.

On the sanitation front, a total of 5,660 households were identified for construction of Individual Household Toilets based on the parameters such as land availability, already existing toilet, list of households provided by block level administration etc. The toilets were constructed using twin pit technology.

Prior to the construction of a toilet in a household, awareness activity was undertaken and the household was made to take a pledge to use the toilet. MamoniBauri, one of the beneficiaries of the sanitation component says, “As a toilet has been constructed, I do not have to go out in the open. It is very convenient for me”.

In order to upgrade local schools, one computer each with power backup was provided to forty Govt. schools. Computer trainer was also recruited to train the students and permanent teachers in operating the computers. Setting up of a library with basic books in Hindi, English and Bengali in each of these schools is another noteworthy initiative of CIL to further uplift these less privileged students community.

This project, with a cost of Rs. 27 crores, is among the high-impact rural development projects of CIL under its commitment for making better and positive social environment along with mining under Sustainable Development.