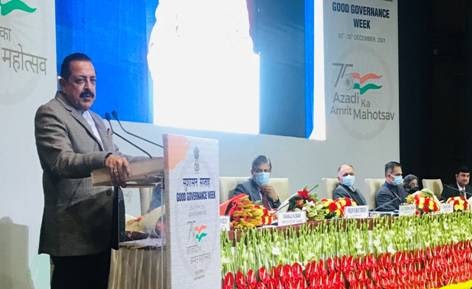 A week-long campaign for “Good Governance” under the banner of  “Prashasan Gaon Ki Aur” was in motion.

The campaign launched on Monday aimed at showcasing and replicating the best governance practices to the grassroots level.

Dr Jitendra Singh said, as a part of Azaadi ka Amrut Mahotsav celebrations in the 75th Year of India’s Independence, a Good Governance Week is being celebrated from December 20-25, 2021 with the Department of Administrative Reforms and Public Grievances as the Nodal Department. He said, through “Prashasan Gaon Ki Aur”- a Nationwide campaign for Redressal of Public Grievances and Improving Service Delivery will be held in all Districts, States, and Union Territories of India.

The Minister said, over 700 District Collectors will be participating in “Prashasan Gaon Ki Aur” and during the weeklong event, will visit Tehsil/Panchayat Samiti Headquarters to provide timely grievance redressal and improve service delivery. The Minister said the objective is to translate the vision of the Prime Minister for Next Generation Administrative Reforms during the Amrit Kaal period across all Districts and Tehsils of India.

Dr Jitendra Singh called upon the delegates to be the vehicles of transformation and underlined that Good practices become best practices when they get shared, and some of them can even excel in execution and set even higher standards. He said the main aim is to provide governance that is corruption-free, transparent and in adherence to established rules and procedures. This alone will make the march to New India successful, he added.

Dr Jitendra Singh said that Prime Minister Narendra Modi has brought a paradigm shift with the “Minimum Government-Maximum Governance” approach wherein which the citizens' interaction with the functionaries of the Government was sought to be reduced through digitalization, consolidation of Ministries, policymaking functions separated from execution, coordinated implementation monitored at highest levels, well-defined accountability and a proper delegation being ensured.

The Minister said that in the course of the last seven years, the Government has made it clear that all its policies are designed to keep the poorest-of-the-poor as the principal beneficiary. Till some years back opening a Bank account for a poor man used to be a tedious process, but now Bank Mitras come to their homes and help them open a zero-balance account, he added.

During the event, Dr Jitendra Singh inaugurated the Exhibition on Good Governance Practices – “Shaasan Ki Badalti Tasveer”. He also launched the Good Governance Week Portal and released the booklet on 2-year achievements of DARPG. A film on “Prashasan Gaon Ki Aur” was screened on this occasion.

During the year 2020-21, 12 State portals have been integrated with CPGRAMS while 15 State/UTs are using CPGRAMS for Redressal of Public Grievances. As a pioneer of district-level integration with CPGRAMS, the JK-IGRAMS integrates the grievances from the Centralized Public Grievance Redress and Monitoring System (CPGRAMS) at the top with the last mile district level offices in the UT of Jammu & Kashmir at the bottom.

Now the Offices at the District level have been linked and mapping up to the Tehsil level and Block level has been done. 260 Departments / Offices and 1724 District level Offices have been linked in the grievance redressal system of the UT. One Nation One Portal is the goal and towards this end Integration of Centralized Public Grievances Redress and Monitoring System (CPGRAMS) with State Grievances portals.