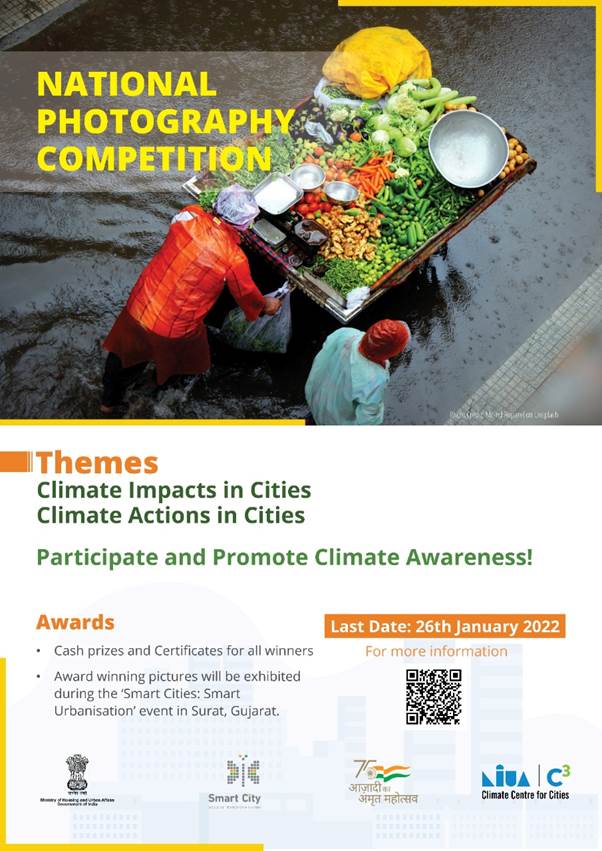 The competition will be open to all participants till 26th January 2022, as part of pre-event activities leading to the ‘Azadi Ka Amrit Mahotsav- Smart Cities: Smart Urbanization’ event on 4th and 5th of February, 2022 at Surat, Gujarat.

Both the campaign and competition aim to sensitize the challenges posed by climate change, enrich the participants with ideas to solutions, and promote climate action in cities.

The campaign will include Municipal Commissioners and key heads of urban local bodies and Smart City CEOs creating awareness across educational institutions including schools and colleges within their cities to align young minds to the challenges and solutions associated with Urban Climate Change and Sustainability. Cities will be organizing one or more of the following activities in their cities leading up to the event:

• Social Media Campaign on Climate Change: The city officials will carry out a social media awareness campaign where City leaders like Mayors/Municipal Commissioners/Smart City CEOs will be talking about climate actions, that can be implemented within their city. The issues that will be taken up for discussion include inter alia plantation drive, cleaning of water bodies, recycling of e-waste, promoting the adoption of solar energy within residential and commercial buildings, or any other initiative which promotes climate adaptation or mitigation actions.

• Promote Photography Competition: A City level Photography competition will be organised based on the theme of climate change.

Details of the events are available at https://niua.org/c-cube/content/climate-change-awareness-campaign

The participants are invited to submit photographs which are either focusing on the impacts of climate change on Indian cities and actions taken by individuals, communities or city authorities to adapt/ mitigate climate change. To participate in the competition, photographs should be submitted in two categories:

The selection of photographs will focus on content, composition and technique. All interested photographers and climate enthusiasts can visit https://niua.org/c-cube/content/national-photography-competition for details of participation. The submission of photograph shall close on 26th January 2022 at 11:59 pm.

Azadi Ka Amrit Mahotsav is an initiative of the Government of India to celebrate and commemorate 75 years of progressive India and the glorious history of its people, culture and achievements. This Mahotsav is dedicated to the people of India who have not only been instrumental in bringing India thus far in its evolutionary journey but also hold within them the power and potential to enable Prime Minister Modi’s vision of activating India 2.0, fuelled by the spirit of Atmanirbhar Bharat.