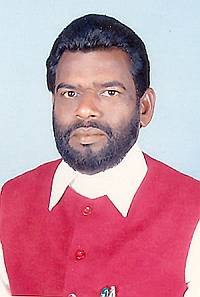 Suspended member of the BJP and ex minister Baidnath Ram is reportedly planning to join the Congress.

”He had already contacted a senior leader of the Congress.If the party high command gives its approval,he may join the Congress before the next Assembly polls”,said Sudhakar Ram,who claims to be close to him

Ram was facing the charge of bigamy after BJP’s Scheduled caste wing’s leader Seema Rai alleged that he had married her.Both Ram and Rai were placed under suspension.

Prior to their suspension announced by the BP’s state unit president Ravindra Rai on Sunday,Ram and Rai had resolved their dispute by jointly signing a letter saying they were husband and wife.The letter was handed over to the Delhi police where Rai had raised voice against Ram.

Ram,who represents Latehar in the Jharkhand Assembly lives in Dhobi Mohalla in Latehar where his first wife stays with two daughters and sons each.