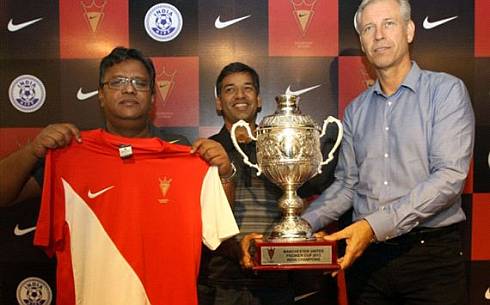 The much awaited Nike Manchester United Premier Cup kicked-off in Jamshedpur with three matches being played at the Keenan Stadium.

Nike’s annual MUPC tournament is held under the aegis of the All India Football Federation will witness 20 best I-League and state teams from across India compete to be crowned MUPC India Champions in Goa on 9 May 2013.

In the first of the day Prayag United scrapped past Sambalpur FA by a margin of solitary goal. For Prayag, Basu Mukherjee broke the deadlock in the 26th minute to give them the lead. The team from Bengal held onto the same margin to end the match at 1-0.

In the second match East Bengal thrashed Uttar Pradesh XI by 4-1. For East Bengal all the 4 goals were scored by Budhwa Bara (6th, 9th, 31st and 39th min). Rajat Pal (8th min) managed to score one for Uttar Pradesh XI but was not enough to stop the red and gold brigade to march ahead with the convincing win.