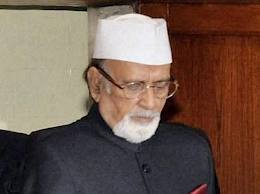 With the President’s rule imposed in Jharkhand,Governor Syed Ahmad is in search of an upright Principal Secretary in place of Aditya Swaroop.

But Ahmad is learnt to have rejected them.The buzz is that the Congress led regime in Delhi is keen to streamline the state administration in its bid to provide an effective governance in Jharkhand.

Toward the same end,Ahmad may prefer to have the Water Resources Department’s Principal Secretary Santosh Kumar Satapathy.