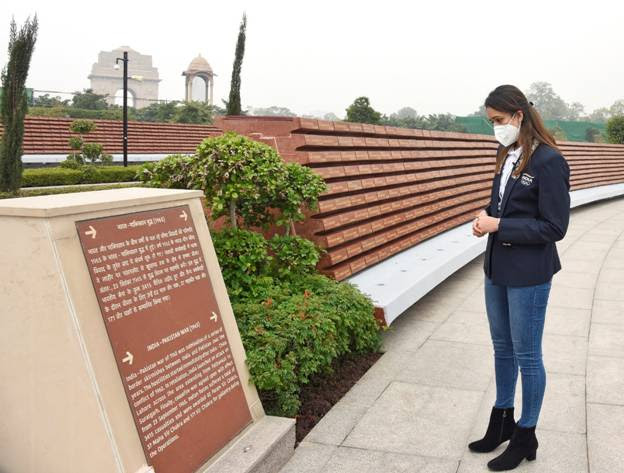 The TT player paid her tribute at the gallantry gallery named ‘Param Yodha Sthal’ in the memorial where a bust of the flying war hero is installed among the total of 21 recipients of the Param Vir Chakra.

“The citations inscribed at the monument about the war and supreme sacrifice made by our soldiers have left me spellbound. As an Indian, my heart today is filled with gratitude and pride,” says the Olympian.

The memorial which is in harmony with the existing layout and symmetry of the majestic Rajpath and Central Vista also has a digital appeal with the creation of the National War Memorial Application and placement of screens with a provision of paying virtual homage to the ones who died in the line of duty.

While paying a virtual homage to another war hero Captain Vikram Batra, Manika said, “The way the monument’s architectural design makes the martyrs immortal, similarly its upgraded digital facilities like a mobile app-based virtual tour guide and digital panels for virtual homage makes it easily accessible from anywhere for every citizen.

The player also visited the unique souvenir outlet ‘Smarika’ which pays befitting tribute to the brave martyrs and is a centre of attraction for all the visitors visiting the monument.